Story of the Van

We have poor signage and poor visibility. Worse, we've been turned down for adding additional signs on the street, even when we offered to pay for them. So the thinking went that we needed some sort of scheme for better visibility, one that would be entirely legal, as sign laws are strict with stiff penalties. The budget was roughly that for a new sign, or $7,000. Enter the adventure vehicle.

I went on Ebay and bought a Toyota Land Cruiser FJ40. The idea here was to pick up an "adventure" vehicle, add a bunch of rugged looking off road accessories, like snorkels and winches and wrap it with our logo and store information. It seemed like a solid idea.

The vehicle was in West Los Angeles, and Michael and I went on a road trip over the Summer to pick it up. When we got there, the vehicle was quite the basket case, with open holes everywhere from removed rust, a rope holding the back door closed, and a ride that is best described as agricultural. The owner threw all the spare bits in the back, an area I'll add, in which you could see the ground underneath, and we took a test drive.

The vehicle's claim to fame was that it was once driven by Christian Kane of Leverage to an audition. He ran it out of gas. Because the gas gauge is also broken. Sensing a pattern? I'm a Christian Kane fan, so that went a little ways towards making me feel better about this ancient, tractor of a truck. I had ass to ass seat contact where Christian Kane once sat. It made the holes in the floor a little more tolerable.

Then on the test drive it broke down and wouldn't start again. It happened in the middle of an intersection while I was driving. Maybe it was the battery, since it wasn't actually tied down to the car in any way. Who knows. The important thing was that it was a slap in the face, a pause, that made me realize this was probably a big mistake. So I shook the owners hand, thanked him for his time, and was on my way. Promised pictures of Christian for the store staff would be mailed soon. Yep, any day now.

It turned out that the FJ40 was a rather hot classic vehicle and to get one that worked, even remotely, was well out of my budget. If it were my car, perhaps I would make the investment, but as a mobile sign it just wasn't worth it. Michael and I drove back empty handed, one of the harder, but better decisions I've made related to cars. We  brainstormed what to do next.

From the very beginning, I had been told to just get a van. The surface area was undeniably huge, the cost of such a vehicle probably low, and the search fairly easy. I had several more bids on Ebay for FJ40's around the country, but eventually they faded when I realized I couldn't get what I wanted. It was time to consider the van. Adventure vehicle it was not, but the idea eventually grew on me.

It took almost no time as I found a used car lot in Fremont with a small retired fleet of Sears delivery vans. The one I wanted was unique and called out to me. It had a sliding door without a side window, perfect as a billboard and peculiar hazardous materials signs all around it. I liked the signs, and throughout the process of getting the van up to speed, everyone who worked on it offered to remove them, free of charge. Nope, leave my placards. With the van bought, we then proceeded to the next stage, getting it painted.

Don't believe the Earl Sheib special prices, at least when it comes to vans. That $399 special comes out to $1000 when you apply it to a giant Ford E350 van. Car washes are also twice as expensive. Once the van was painted, we had to wait a month for the paint to cure. During that time, we went through countless designs with our graphic designer. We were able to get permission to use some amazing Paizo artwork for the van during this period. Then we scheduled to get it wrapped with a company in Sacramento. About half way through this process, we started over again. We realized we had under-estimated what was possible with a full wrap.

So seven more revisions later and we finally had something, although it took another couple more weeks to finish the project. Four months into this and it was feeling like a boondoggle. We were paying for insurance, gas (it's a big pig) and other expenses while we were doing all the work, so it was seeming like a not so great idea. It was better than the Christian Kane option, but man, it was beginning to feel foolish.

Today it was finally worth it when I got to pick up the finished van. It's more than I had hoped for, thanks to quite a few people. Pro Wraps in Rancho Cordova did the wrap job for us. Jess Gardner was our graphic designer through most of this and she put in countless hours of volunteer time. Special thanks goes to Paizo Publishing for letting us use their award winning artwork, the black dragon from the Pathfinder Beginner Box. They allowed us to use it sight unseen, without design approval, which was a massive act of faith on their part.

My wife drove me back and forth to drop off and pick up the van, about six hours of driving this week, so she deserves a lot of credit. Michael Parker was a great sounding board through the beginning of this process, gently guiding me to the inevitable correct conclusion and carefully navigating the dismantling of my adventure vehicle dream. Failed dreams can be treacherous. The idea for the placards was crowd sourced and can be attributed to Michael Webb's suggestion. And finally, I should thank Christian Kane for running out of gas in the FJ40. It turned a boondoggle of a road trip into a decent anecdote. 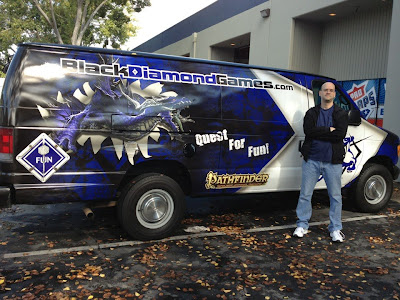