You should read the title as"our" top game companies of 2012, since we're one store and not the entire game industry. We do strong sales and we don't have much local competition, so I still feel we represent the local community fairly well, at least with what is sold in local brick and mortar stores. This does not tell you a good number of things, like sales by department or sales by individual item. We compare a lot of data when making our decision and this is just one small data set.

The point of this exercise is two fold: First, we want to see who we should be paying more attention to. Wizards of the Coast dominates at a nearly frightening level now that Magic is so popular again. It's such a big percentage of sales that I sometimes wonder if we need a WOTC employee, someone whose sole job it is to manage that brand in-house. That sounds crazy, but I've seen it done elsewhere when Games Workshop dominated. So reason one is to see who needs more attention.

Reason two is to put that growing pain in my posterior into perspective. Who is being a pain in my ass and should I continue to tolerate it? What company is requiring a disproportionate effort? Battlefront with Flames of War was in that category before we dropped it. Konami with YGO still seems to justify the occasional chcken on the carpet event, at least until employees start quitting or the police get called one too many times. Yes, they're that bad. Note that the nationwide game store backlash against this horde of monsters will be immense if it begins to falter. Konami should address this.

The chart also says the consolidation of board game companies with one distributor is really a buzzing fly of a nuisance when put in context. I sell more Coke products than Days of Wonder or Z-Man and I kind of think I sell a lot of both of those.In fact, I'm going to call it the Coca Cola Line. If a company falls below Coke, a necessary but nearly invisible commodity product category, I'm not going to worry about it.It doesn't mean I don't like, respect, appreciate or try to sell the heck out of those products, it just means it shouldn't keep me up at night. 10pm worried phone call from an employee: Well, is that game above or below the Coca Cola Line?

Finally, as I've discussed many times, Other is huge. Yes, Other, as individual companies, falls below the Coca Cola Line, but other is the reason for our existence, our expertise, our killer app against big box stores. Other is that one item for that one customer. It's paying attention to the game trade and getting excited and inexplicably talking about things that from the charts, really don't matter. It's how we carry more individual items than Costco with a smaller percentage of floor space. Other is really why we continue to do this. Other is energy and excitement and the hope that one of these others will make it past the Coca Cola Line. 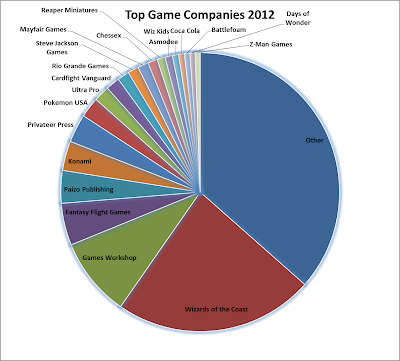