Among the many misconceptions about game stores is the amount of money they make on a sale. I wrote a post like this years ago, but lets try it again.

The first thing to know is we own our inventory. Once it arrives, it is ours and we don't have the luxury to return the item if it doesn't sell. It's our responsibility to run with the ball, now that we've bought it.  We also have no relationship with the publishers to speak of. There are no rebates, coupons, or special relationships that allow us to somehow pass our costs back up to someone else. We're entirely on our own. 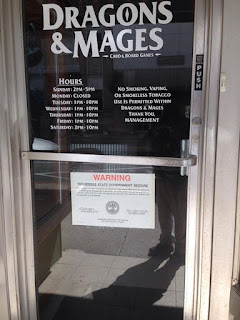 On a $100 board game, the example I'm using, we will be collecting sales tax, which for us is about $9. That $9 sits in our account for 3-5 weeks until we remit it to the state. Any advantage we have in holding that cash (in our non interest bearing checking account)  is countered by the pound you in the butt consequences of somehow screwing up a payment to these people. Before it was electronic, I made a number of errors that were often discovered a year or more later, resulting in penalties and interest of extreme proportions.

The first thing we do when we sell a $100 board game is order another one, or if it stunk, something better. That means we spend $55 on replacement inventory. This is known as our cost of goods. Cost of goods will often include shrink, but I've pulled it out for you.

Shrink is approximately $3.10 of money that was given out in error, received improperly, stolen from the till or inventory that was the victim of the five finger discount. About $1.55 will be stolen by someone on staff and $1.55 by customers. That's on average as we rarely know which is which, or who is doing what. This happens every single day and is the cause of most retailers losing faith in humanity.

$12.21 will go to pay our staff, which of course, circulates throughout the local economy to pay rents, food and other expenses. Most store owners have a salary they take from this amount, or at least they should. In California, this number will be rising about 10% a year for the next five years, as the new minimum wage law kicks in.

$3.93 will go directly to paying taxes, either payroll or income for the business. This does not include property taxes and the many, many, regional taxes hidden in our rent payment that people continually vote for and forget about here in California. That's probably another $1.50 included in rent. This also doesn't include income taxes for the manager and owner. That's probably $2 or so taken from payroll and profit (below).

$9.67 goes to rent, including the previously mentioned taxes, and maintenance of the building exterior (called Common Area Maintenance or CAM).

$1.99 goes to advertising. If you're reading this on Facebook, I probably paid for you to see it.

$1.74 goes to utilities, a big chunk of which involves keeping our game space at a reasonable temperature. It includes things like our alarm system, Internet and phones, garbage and the biggest, electricity. Water is in our CAM charges included in rent.

$1.53 of the average $100 transaction goes straight to the credit card processors. It's a fee much higher than the rest of the developed world. They're nearly 10 times the fees paid in Europe.

$.90 goes to travel to trade shows and conventions, so we can be better informed sales people and learn how to operate our businesses better.

$.61 goes to insurance, which includes business liability insurance, skyrocketing workers comp insurance, and a "key man" life insurance policy that ensures the business has continuity if I get hit by a bus.

$.34 goes to outside services, like our accountant, IT consultants, and the attorney. Some stores spend a lot more on accounting, but we do book keeping in house.

$.31 goes to over 100 office related expenses, from stamps to pay bills to pens that constantly run out of ink.

$.31 goes to servicing debt, which in our case was used for our expansion.

$.23 went toward "Big Blue," our van we take to conventions. We have a vehicle insurance policy on the van, but this category also includes repairs, parking and gas. Because its primary function is a bill board, this could be considered an advertising expense (unless you're the IRS, in which case we're certainly not claiming it as an advertising expense).

$.14 goes to licenses and permits, including the ridiculous county fee for "inspecting" our barcode scanner. Such a scam. I used to write "For Sensual Massage" in the memo field of the check I sent them, until I had to uncomfortably explain what that was about to my accountant (I still do it, but delete that field in QuickBooks right after).

$.13 goes to subscriptions and dues, like our POS software annual fee, our GAMA membership, and services like Carbonite for backups.

$.07 of this transaction goes towards the interior upkeep of the building, which has been thankfully low lately. When we first moved in, I swear we fixed absolutely everything that could break. We've replaced doors, toilets, sinks. you name it.

$7.77 is net profit. You can see here that there is not a whole lot of wiggle room for things like discounts. I could give away a 7% discount and break even, or I could feed my family instead. Most game stores are in the 5-10% range. To be honest, we had $11 of net profit last year, a record for us, but that $5-10 is more normal. If there's a take away from this, remember the 7's. That's what the average retailer has to work with when it comes to price flexibility. $2.33 of this will be taken to pay income taxes. 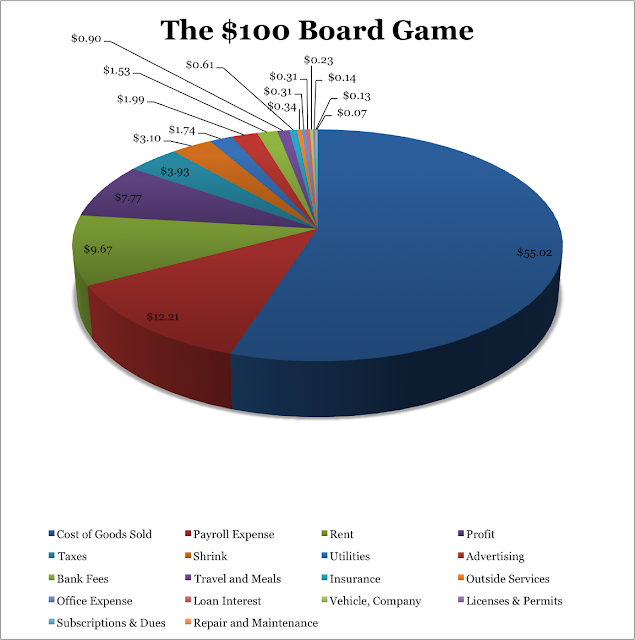