Before I bought the Black Diamond Games van, I bought a Toyota Land Cruiser. This was going to be the store's adventure vehicle, with a cool wrap and our name in big letters to attract street traffic to make up for our anemic sign. The Land Cruiser's claim to fame was Christian Kane once ran it out of gas on the way to a music audition (the gauge was broken). The old Cruiser looked amazing on the outside, a weathered, ancient vehicle that had surely seen quite a few exciting trips.

When I started the test drive, well, that was another story. The beast took a while to get started, then it trundled down the street like an ancient tractor. If you looked behind you, you could see the road passing by through the cargo floor. As I picked up speed, the thing began to cough and sputter and eventually it simply stopped working, leaving me stranded in an LA intersection, the owner next to me swearing it was a minor setback. It turned out the battery was attached with a bungee cord that came undone, but he never could get it started again and I shook his hand and walked away, leaving my Ebay deposit with him. I considered myself lucky. The game trade is like that Toyota Land Cruiser. 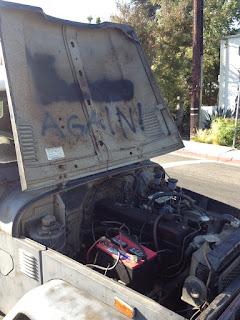 The common saying for game trade retailers is two steps forward, one step back. There are no easy profits, no sure things, and more than likely, when something gets hot, the publisher or distributor or some idiot retailer will open the pot and let off the steam before it becomes a big deal. Large retailers know the game trade eats its young, so they work hard to capitalize on good games quickly, bringing in large quantities, demoing games extensively, mastering organized play, so when the publisher-distributor-retailer inevitably screws up the product, they will have already capitalized on its popularity. Two steps forward, one step back. The game trade can't get up to speed without feeling like an ancient tractor about to blow a gasket. It's like a piece of crap Toyota Land Cruiser that continues to exist entirely because of nostalgia and now that there's big money involved, that vehicle is no longer acceptable.

Times are changing and people are freaking out. Asmodee has dominated the final frontier of the game trade, the board game market. It's natural in any mature market for a leader to dominate roughly half the sales in its category. Then as the market gets even more mature, you see fragmentation, but we don't see that yet, we only see a quick domination of the hobby board game market by Asmodee through acquisitions.

It was such low hanging fruit, it's mostly a surprise it didn't happen sooner. Hasbro could have done it if they felt like it. Asmodee does not wish to ride in the piece of crap Toyota Land Cruiser, where you can see the road fly by through the holes in the floor. They want a new vehicle, bereft of clatter and empty promises of goodwill. They need something that can handle high performance. And that's what they get with exclusive distribution.

Exclusive distribution combined with brand value protection is a terrible deal if you're a crappy retailer. If you can't manage your finances, keep tabs on your inventory or the only tool in your toolbox is a product discount, you now have serious problems. If you rely on the holes in the floor of the vehicle that is the game trade to jettison weight to keep your vehicle moving, you are going to have a harder time moving forward. It's not just Asmodee though, Wizards of the Coast is being run more like a corporation than a typical game company, as is Games Workshop. These companies could care less if your wheels fall off because of their increased product release velocity. You are being forced into a vehicle where you must make smarter decisions on the front end because you're now restricted on the back end. Do you have the guts to take your crappy Land Cruiser on the highway?