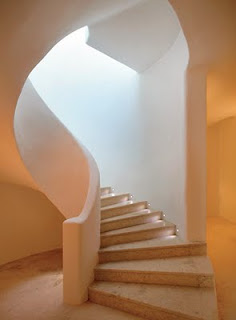 Privateer Press released their "core" list yesterday, what they consider to be a "list of models they believe "represent popular model choices for both new and existing players and showcase the core essence of each faction." That might not mean much to the players of Warmachine and Hordes, but it's a valuable tool for retailers.


Without a "core" list, retailers are left with a guessing game. If retailers know a game really well, an assumption that a lot of manufacturers/publishers seem to make, despite having dozens of game systems on the shelf, retailers can attempt to keep stock in line with what's necessary and what sells. However, when a line grows beyond a hundred or so items, that task becomes onerous and in the case of miniatures, often impossible. Providing a "core" list basically allows the retailer to leverage manufacturer knowledge to stock appropriately.


This assumes that the manufacturer is being truthful and that the list is truly core, not just a bunch of stuff they would like retailers to carry. I'm already getting some negative feedback from a couple Warmachine players, but we'll wait and see. Core, unfortunately, can't account for local tastes.

A smaller core list is probably better than a large one, something more than 3 items (traditional D&D) but less than half the line. This also assumes the list will change periodically, and not be a static list that gets stale. So with this list of "core" in hand, retailers have a couple of strategies they can employ.

At a minimum, retailers can stock core and special order any new releases. What we usually do, with Warhammer Fantasy for example, is stock core and then stock all new releases. Core always remains stocked but new releases are allowed to fall off if they don't sell with our usual performance metrics. So some non-core stuff stays on the shelf while others disappear over time. If a game starts to take off, we can bring more of that in. If a game becomes truly golden for us, like 40K or D&D and Pathfinder, we stock the full line regardless of metrics.


The true value of core, I think, is it lets you treat a game systematically, beyond just inventory. You stock core, you bring in new releases, you promote events and give appropriate support. You then know your inventory is appropriately managed, taking the guesswork and subjectivity out of that variable and that you've done what you can to market the game. They you can then decide if the game is worth keeping or not.


For example, if I stock core and support Warmachine to the greatest extent possible (we now play on Wednesday nights and Sunday mornings, hint, hint) and the inventory languishes with low performance metrics, I can make an educated decision that the game doesn't work for me and I can drop it. That's what happened to Flames of War. Low performance metrics supporting core, low sales of new releases and nobody stepping up to run events. This saves years of trial and error and lost revenue.


The positive side of core is that I'll theoretically have everything a new player needs to get started, core product for existing players, and more confidence in new releases and the necessity of allowing non-core stock to cycle off the shelf. I'll be more confident in providing event time slots for the core game and there will be overall more confidence in steering prospective new players into that system. The manufacturer can likewise prioritize production of core products, so we're always working together.

We'll be bringing in 50 models we've dropped in the past to support Warmachine core. We'll take a look at Hordes next. 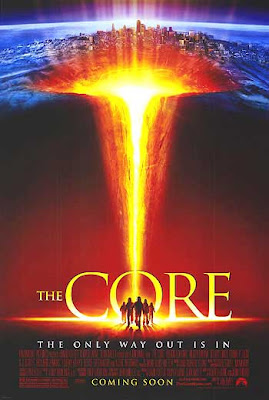 The Problem with Yugioh

Yugioh is a special case. This hugely popular collectible card game has a problem with consistency. I speak entirely as a store owner, not a player, so when I write of consistency, I refer to customer demand for the product. Demand for Yugioh is horribly uneven due to the varying quality of each release. While Magic sets might vary in quality, they still maintain a certain baseline standard of usefulness that creates a steady demand. Indeed, Magic sales have been steady, according to Wizards of the Coast, since the game first came out. Yugioh has very hot sets and very, very cold sets.

Because of this hot and cold problem, distributors, our main source of product, want little to do with Yugioh. A hot set will sell out quickly, but a cold set could take years to sell through. So distributors treat Yugioh like a one-shot, fire and forget trading card game. It's a hot potato and they want out before the kids make up their minds. Get what you want from them now, because next week (or even today, if you were too slow) it will be gone from their shelves. So what do you do if you're a store owner?

You can try to predict sales, which works to some degree, but more than likely, if you're intent on catering to your Yugioh crowd, you're going to stock up and sit on it for the long term. This is very expensive. Yugioh doesn't have the "anything Magic" sales patterns, in which there is little risk because it will always sell. Once a set, deck, tin, mat, or card sleeve starts to peter out, it's a long slog until that set is out of stock in the store. Worse, some customers want and expect older product to be on store shelves. Why? Because we're all stuck with this old crap on our shelves. There's a perception by customers that this is normal. It is not.

I want to stress that this is very unusual in the game trade. For the most part, our store uses just-in-time inventory management. What you see on the shelves is 99% of what we carry in the store, because anything we want can be brought in tomorrow ... except Yugioh. Stocking Yugioh deep, therefore, adds an extra cost to doing business. For example, if I have an extra $3500 at cost in Yugioh that I'm constantly hording, that's $30,000/year in lost revenue ($3500 at cost equals roughly $7500 at retail, times four turns equals $30k). Comparing this number to our actual sales of Yugioh explains why many stores want nothing to do with it or stock it lightly. It's deadly.

I don't think Konami can make a release suck less, because that would be nothing short of a freakin' miracle, but I do believe they could stock their own product broader, deeper and easier. I don't need a case of last years release (12 boxes), but if I could mix and match a few older boxes at a time, the distribution problem would be solved. If they believe in their own product, they should be willing to sit on it like I do. 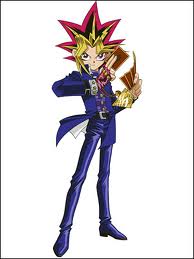 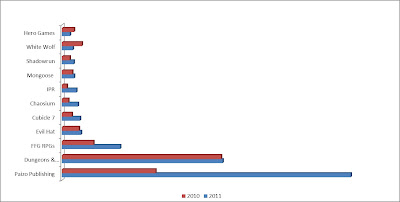 This was posted to Facebook on the Black Diamond Games page last week, if it looks familiar. It shows our year to date RPG sales up 60%, led by Pathfinder up 300%. Of course, the usual caveat applies that this is our store and the RPG industry or game stores in general may not be doing as well. There was a rising tide of RPG sales for us, with most of our top ten publishers increasing.
To answer the most common question: D&D miniatures are not included in this, since we track them in a different category. Paizo accessories like flip mats are included in the Paizo numbers.
I see a clear change in buying habits from our customers. There's definitely a "new normal," but they generally are more free with their money, especially on products they perceive as higher quality. I actually think the quality and utility of RPGs has increased since the beginning of the recession. There's also an interesting PDF phenomena.
I'm now happy to carry print products that were previously PDF. The idea is the PDF has been vetted by the online sales process. The top ones are selected as print products. The distributors then choose which ones are most likely to sell. They're generally right. Those PDF products don't get stocked deep, and many are sold in the dreaded "periodical model," where I buy them once and let them go after a single sale. Still, it's a sale.
Most of these PDF products were for Pathfinder, and honestly it's the one with the widest base for us and the least risk.  A Shadowrun PDF, for example, is dangerous as a print product when it's likely our player base (something like four guys) are likely to have bought it already.
Posted by Gary Ray at Saturday, July 02, 2011 No comments:

We're running a bit behind, but we want to offer a pre-order deal for Magic 2012: