There is much talk about the demise of retail. We have Sears, JC Penneys, Macy's, Radio Shack, K Mart, GameStop and many other big chains closing shop this year. It has been described as an apocalypse, with over 3,500 stores closing. But what's it all about and what does it have to do with specialty retailers?

The first thing to know when assessing the victims of the Apocalypse is the number of stores starting out. According to the National Retail Federation, there are 3.8 million stores. This bloodbath of end times stores therefore accounts for .09% of retailers. So why the hyperbole and rush to declare retail dead?

Business reporters are only interested in publicly traded stocks. Unless the entirety of retail were to be feeling some sort of stress, they'll focus instead on companies with well known stock tickers. Nobody cares about my store because you can't make a buck buying from selling bits of it. You can't predict the future by reading my annual report. My CEO compensation is definitely not worthy of a social justice meme. So no, this is not a condemnation of retail and I don't even think it's condemnation of the venerable shopping mall. It's a failure of UVP.

UVP is Unique Value Proposition. These stores lack one. In fact, they're so far away from a UVP, the concept of UVP isn't even used in the conversation. Unique is instead changed to Useful. They need to have a useful Value Proposition (uVP), with a small "u." While their online competitors battle it out for Unique, they struggle for relevance, for Usefulness. These legacy stores are unable to come up with a uVP, and are simply waiting to die. They are so big, so entrenched in the 20th Century, they actually take a long time to expire, like a dying star going supernova. The only question is whether they'll become white dwarfs or black holes.

The main reason they're not useful is they've failed to change with the times, something specialty retailers are especially good at. Millennial customers, in particular, are about experiences rather than acquisition of goods.  Specialty retail has embraced concepts like Third Place Theory to take the experience economy into account. Barnes & Nobles is known for Third Place too, with their in-store coffee shops, but with a 30,000 square foot store footprint, there is no way to use specialty store tactics with big box real estate. If Barnes & Nobles was 5,000 square feet, sure, but they're doomed with 30K and a business model that can't adapt fast enough.

So no, retail is not dead. Business reporters like to report to their investor community, meaning we (the public) are not the target audience for apocalyptic visions of the future. As specialty retailers we need to stay nimble, stay useful, but aim for unique.

Here's the thing about competition, a well run, well rounded store is shielded from direct competition. You can't generally steal customers. It doesn't work that way. If you could steal customers, game store owners would have endless online debates about their favorite Zippo lighter style rather than preferred brand of point of sale machine. The tool would be fire. Just burn down your competitors store and voila! Instant customer base. Instead, we see this figurative burning down, petty back and forth bickering and low ball giveaway events, between small stores.

This is because a poorly run, narrowly focused store is entirely vulnerable to having customers stolen. Customers will be taken and their store will die. If all they sell is Magic, their tool chest consist of a calendar and price. That's not even a tool belt, more like a pair of hammers in your back pocket.

I know all about this because we experienced the clown show first hand. I had competitors open to steal my customers because of their superior pair of hammers. However, because we were well rounded, and sold many other things, we shrugged and waited for them to implode. When they imploded, the competitive Magic community came back (which were really perhaps half the people who bought Magic). You can't build a game store with a pair of hammers.

If you're looking for a solution to this problem, it's pretty clear. Your construction skills are weak. It's not about pounding with your hammer. A solidly built, diversified game store is built to weather the storm of the ups and downs of the game trade, as games and customers ebb and flow. If the need to succeed at any one game or the need to cater to any one community is enough to sink your store, you are a slave. Your stated goal to run a small business and be independent is a lie. Put down the hammers and start building value for yourself and your customers. 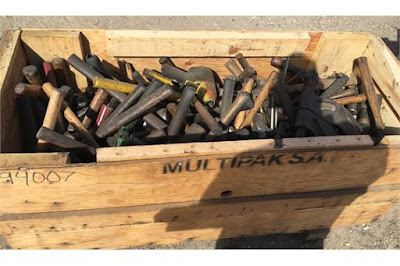 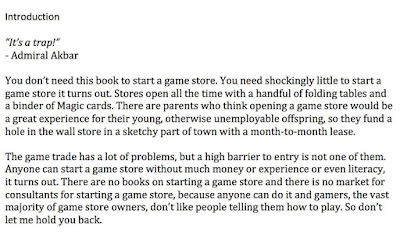 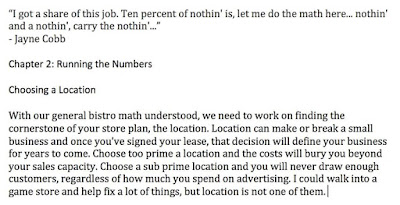