There's a retail inventory concept of the product pyramid. The pyramid is a collection of products, in which a small number of top sellers at the top support a large number of slow sellers at the bottom. The typical approach to inventory management would be to drop all the slow selling product at the bottom. If you do this, you collapse the pyramid, reducing sales of the top sellers. You have impacted your perception of a collection.

Customers want to see tremendous choice, every color of the rainbow on offer, for example, but in reality they only choose primary colors to purchase. I've started ordering better selling dice sets deeper, and there are perhaps a dozen really good sets out of a hundred. Remove the supporting colors and customers are unhappy with the selection, even though their eventual purchase is represented.

An unstated principle of the product pyramid is we need to suffer through the dreck product on the pyramid bottom, because that's the only way to sell dice or puzzles. Cut out the bottom and the top suffers. For example, carrying the full line of Chessex dice makes sense from a product pyramid perspective, or the full line of Ravensburger puzzles. When these two "gold standard" product lines make up the majority of sales in their categories, you play this pyramid game.

This changes, however, when the market becomes flooded with competitors. A decade ago, I could point to three significant companies who made dice. Now there are innumerable companies and I'm solicited weekly by new ones bringing in dice from China. There have been over 100 Kickstarter projects just making dice. My own store went from a primarily Chessex store, with a smattering of Koplow and Crystal Caste, to carrying and supporting dice from eight different companies. Our puzzles went from two companies to six. In the case of dice, the product pyramid is crumbling. In the case of puzzles, not so much, and I'll explain why.

With my much larger dice selection from seven companies, I don't need to support the slow selling bottom of the product pyramid from companies like Chessex. It's true I may not have every color of the rainbow, as it's impossible to monitor my color spectrum when I'm only looking at inventory performance. However, this does give me the opportunity to have a very wide selection without sacrificing performance. The key is this: Customers honestly see no significant difference between a Chessex die made in Germany and one of the other seven brands, made in China.

This is not true for puzzles however. Puzzlers are very much aware of the quality between puzzle manufacturers. There are certainly Wal-Mart shoppers who burn through puzzles and are more price conscious than quality conscious, but that's not our crowd. Our crowd knows the puzzle quality rankings and understands the differences between brands. As much as I would like to replace Ravensburger with our Eurographics or MasterPieces, customers just aren't having it, at least not in the volume of Ravensburger sales. It's too bad that company can't remotely keep up with demand.

So for the pyramid to crumble, you need to not only have strong competition from competing brands, you need comparable quality in the eyes of the consumer. There are dice brands that attempt to claim superior performance, with sharp edged corners and superior construction, but nobody is buying that nonsense. For the most part, random number generating polyhedrons are more or less equal across brands and manufacturers. I just wish that were the case with jigsaw puzzles. 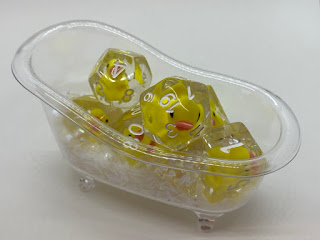