When I would shop at game stores before I had a store, one thing I swore I would never do is shrink wrap books. How can I possibly tell if I want a book if I can't see it? Most of the "shock and awe" stores, the ones with tons of inventory that seem more like time capsules than businesses, tended to shrink wrap books. Often it was because they intended to carry that book until it sold or their store closed for good. However, it turns out most stores have a pretty good reason to shrink. It's one more store practice I probably owe someone an apology over.

What I discovered fairly soon after opening my store is that a lot of RPG books will bow and warp with the weather. Eventually you're left with a sad little book that nobody wants. That book, despite how good it was, would end up in the clearance section, and no store owner wants to re-order something they just clearanced.

This is also a reason why game store owners like me prefer hard cover books (unless those warp -- AKA Mongoose). I'm often fairly oblivious to price, so whether it's a $20 softcover or a $35 hardcover matters little to me. There's even a part of my brain that would rather sell far fewer $41 Warhammer Fantasy hard covers than more $33 soft covers if I don't have to worry about them warping and becoming shelf worn. 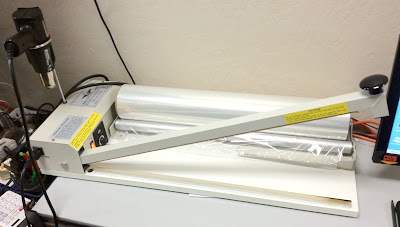 So to fix the warpage problem, we shrink wrap the books. We've got a "machine" that does that. It's basically a roll of plastic on a roller, an arm that melts it, and a hair dryer to shrink it. Often we can shrink wrap a warped book and it will miraculously go back to normal within its sterile little plastic wrapper.

Most of the books we shrink wrap are for Pathfinder. Why? Paizo puts out a huge number of books. We carry all of them. Only 9 of those nearly 200 books are hard cover and most of those soft cover books sell, as a group, slower than your average hard cover, but fast enough that we very much want them on the shelf. This means they'll almost all eventually get shrink wrapped or suffer the scourge of warpage. The difference in the way we shrink and others shrink is that we wait until signs that a book is beginning to warp before jumping into action. A lot of softcover books sell fast enough that they don't need the shrink.  If you're clever you can use that information to see our best sellers (reinforced by the fact you can read, and are therefore more likely to buy that book, since you can see it).

I go into all this because I want to dispel the thinking that we shrink wrap to prevent people from reading RPG books. In fact, it's pretty obvious to me that you're more likely to buy an RPG books if you can read it, especially a book from Paizo. While older D&D books tended to have a nugget you desperately wanted along with a bunch of schloch, the Paizo books tend to deliver the whole package. At least that's my personal opinion and my sales experience. So when we shrink wrap a book, it's done reluctantly, with the acknowledgement that this will hurt sales. It's not to keep it for posterity in the hopes it one day sells (like our shrinked AD&D books). It's also not that way to prevent shoplifting (like our shrinked Warhammer 40K books, which disappear into our Game Center). It's just one of those things we need to do to carry that line.
Posted by Gary Ray at Thursday, January 26, 2012 No comments:

We Need a Strong D&D

The cat is out of the bag. Wizards of the Coast is working on the 5th edition of Dungeons & Dragons. It looks to have all the right elements, like great designers (Cook, Merles, Cordell), an open play test they've promise to actually take into account (unlike 4E), and an all inclusive view of the game that's supposed to appeal to every player of every incarnation of D&D. It sounds too good to be true.

From a retailer perspective, a strong Dungeons & Dragons is critical to role-playing games, even if you don't like Dungeons & Dragons. D&D is the cornerstone of most store's role-playing department. Quite a few game stores have dropped role-playing games entirely with D&D flagging. The same would happen to us if we suddenly lost Warhammer 40K or Magic (board games are more diversified), and probably Pathfinder as our D&D stand-in. That's just unimaginable to me, like how I know I should drop chess sets, but I just can't bring myself to do it. How can you have a game store without chess sets? How can you not have Dungeons & Dragons?

Gaming segments live or die on their top dog, their market equivalent of Coke, or Hertz or whatever naturally dominant product drives sales. Without D&D, there are none of those "community service" level RPGs that we order 1-3 copies of each month, AKA everything not D&D, Pathfinder or Warhammer 40K RPG. You know what I would do if D&D (in my case Pathfinder) died? I would put in a coffee bar. That space would be dead to me. Also, despite what all the Amazon shoppers might think, the game store as community center is still thought to be the nexus of where new players meet the game for the first time. It's not your cousins basement or ENWorld.

But can't Pathfinder be the top dog? Maybe, if it has to. Honestly, I think Paizo does a much better job as an underdog. I think their guerrilla marketing and more adult oriented products play better as the snarky upstart. If D&D goes away, Pathfinder might have to take up that mantle, but I would rather they have a monstrously big D&D to thumb their noses at (in reality, the designers of both companies are friends and hang out together). It's much easier being an underdog. Americans love their underdogs.

The release of D&D 4 was the second biggest RPG release of the decade, second only to the release of D&D 3. Will we be as excited about D&D 5? Probably not. We don't know much about it yet, but it looks promising from what little we're hearing. D&D 4 came after a stellar, albeit somewhat flawed performance by D&D 3. D&D 5 will follow disappointment. D&D 5 will enter a marketplace dominated by a perfectly good version of D&D that they abandoned.

Success of 5 will ultimately depend a lot on whether the suits get hold of it. WOTC corporate tends to screw up D&D, from what we know. They did it with 4 and they did it with 3 right after release. If D&D 5, which is inclusive and community building, clever and wonderful, spanning the decades, and is full of passion, then great. But if D&D 5 is inclusive and community building, but is in reality a shameless attempt to leverage decades of intellectual property for cheap financial gain or drive people to a new video game, then, well, probably not so much. My guess is the release will be great, and then cheap financial gain will step in.

The pitfalls are likely going to be the company itself, which tends to consider creativity and passion for games to be an expendable resource that can be tapped at their convenience, focus grouped when they've lost their way, with the brand ridden hard when required and put away wet. Once the creatives do their job, they tend to be jetissoned, and the suits take over and we see a slew of ridiculous products that look brainstormed by the marketing department (another revolving door). I have a lot of faith in Cook and Mearls and Cordell, but I'm sure they get a little nervous during Christmas time when the pink slips blow around like New Years confetti. So you suits out there, don't screw this up. 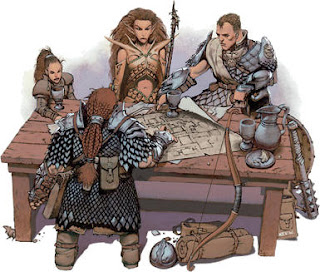 I was asked to write something for an industry newsletter, so it got me thinking about posting new stuff. Plus I had a wicked hot Vindaloo and couldn't sleep. Here are some posts I would enjoy writing, but probably shouldn't: 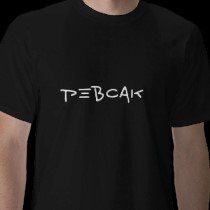