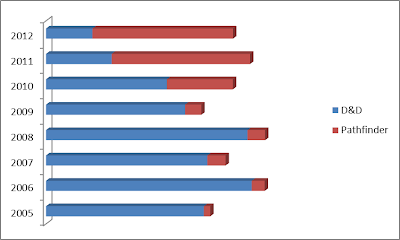 End of year analysis often comes down to updating old charts and watching trends. This one is looking at the story of Pathfinder and Dungeons & Dragons and the how they've defied conventional marketing. In just two years (comparing 2010 and 2012 numbers), they've switched places in my store, something that should be impossible by old standards. Next year I expect you'll be able to compare 2009 and 2013 numbers.This has happened in quite a few other stores as well, from what I've gathered. As the D&D books go out of print, however, this kind of data becomes less relevant.

That doesn't mean D&D 4 is dead. At one point I thought it might be irresponsible to sell people on a game system going out of print, but there are still a good number of players, although they rarely buy books nowadays. I still find myself selling red box sets to boys interested in playing an RPG. The D&D name, combined with the low price point and the simplicity of the game makes it a better choice sometimes. You can still get most D&D products. I don't take that approach with adult customers. In my mind, Pathfinder is still ADVANCED Dungeons & Dragons and 4E is basic (or more accurately, casual).

The other data point I like to look at are core rulebooks. I haven't crunched those numbers, but I can say they're down in our store for both games, meaning we're likely seeing market saturation for new players and converts. The dream of the two games creating a larger pie is probably not going to come around, as last year was just average. Perhaps in 2014 we'll see a big upswing with D&D Next. There's still not a lot of proof that we can get both games firing on all cylinders.
Posted by Gary Ray at Friday, January 04, 2013