Ten years ago today I opened my store, gleefully ignorant of the game trade and just about every aspect of retail. I learned though, because that's what I do. I came from a career in information technology where it was assumed you didn't know many things, but you learned and moved forward. I have many veteran retailers to thank for helping me move forward, and quite a few books and articles. I'm starting to write my own.

The spreadsheet that I've lived by every day, for ten years now, says we made $95.02 in sales on our first day. Despite the common retail story, I never did a day without a sale, although that following Sunday came close at $8.49. I don't recall, but it may have been a pity sale. Sales for the entire month of November 2004 would add up to an average Saturday in the current store.

I've learned a lot in the last decade, seven years of which you can see if you go back in the blog posts.  I've considered deleting them, but I keep them up so new store owners can watch the process. Understanding did not come easy.

What I didn't expect, what I couldn't expect, where the life changes that happened during that time, often in spite of the store. My son was born and adopted by us six months after the store opened. I recall getting the call that we needed to go pick him up, 400 miles away, right now. I was working the counter that afternoon.

My wife fought and beat cancer, nearly by herself, as I worked 60 hour weeks trying to pay the bills. Not being around enough is a point of friction that's still there. My current goals are college funds, retirement plans, out earning the cost of increasing health care expenses and timing vehicles so we have no more than one car payment at a time. And I always make time for that little boy, regardless of everything else. Vacations? We'll do one again ... one year soon I'm sure. Our passports are expired.

If it sounds a lot like my goals are financial, you're not wrong. Another issue with ten years building a business is you're reluctant to aspire towards risky endeavors. It's why small companies can compete against big companies. Small companies can move fast and out maneuver the risk averse. Avoiding risk as a small business owner is perhaps the biggest risk.

My ten year lesson is once you're successful after a decade, it's unlikely you'll define success the same way as when you started. That $95.02 was a big success in 2004, when I didn't even know my break even point had another $500 to go. It's nearly impossible to think down the road that far, about the kids and the mortgage and your health, which is likely less robust than when you started. If my life had shifted just a couple years to a small child underfoot and a sick wife, I'm sure I would never have taken the plunge.

The good news is happiness. Hard work and long hours is taught to be a grueling, aging, eventually debilitating and self defeating experience ... when you work for someone else. When you work hard for yourself, you become younger. You thrive. My masseuse recently told me on my 47th birthday that I had the body of a 42 year old. I'll be basking in that faint glow for weeks to come. Happiness, for me at least, means being the master of my own destiny ... with work at least.

You have to like doing this, of course. You have to not mind being in a constant state of interruption. You have to trust people, employees to take care of your baby, and maybe even open up to them as friends and colleagues, despite the risk of betrayal. The customers are wonderful too. You're job is to make them happy, to make them smile. We do this! Working everyday with people who are happy to see you is a special blessing. I've enjoyed watching kids grow up before my eyes and employees developing into capable professionals. I give these people the credit for my missing five years, because it sure wasn't diet and exercise.

Please join us for our anniversary part on November 9th, if you're in the area. 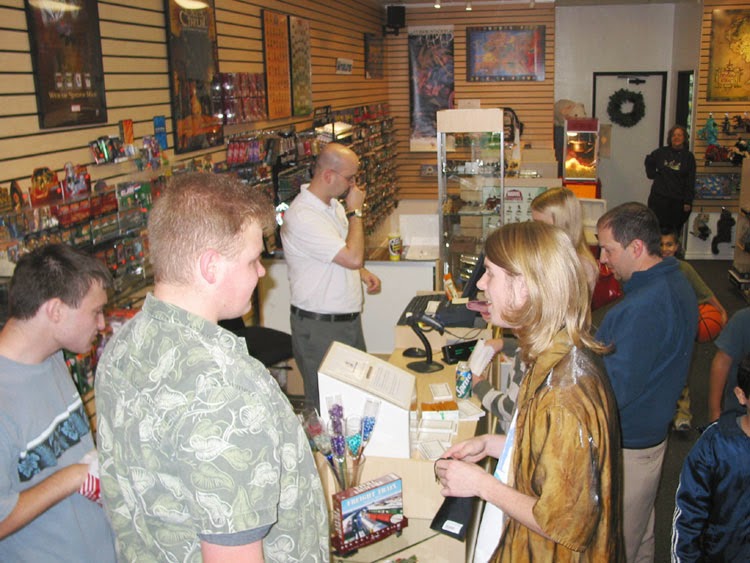