Happy holidays! Isn't this an exciting time of the year? Oh right, I was going to talk about looting. It happened last night in Berkeley and tends to be a regular occurrence both there and in Oakland. It's a wretched Bay Area tradition that brings in people from neighboring communities.

As business owners, we want to protect our property, and that includes damage and theft from rioting. The good news is most business insurance policies cover rioting. Call your agent to make sure though.

I am assuming you have business insurance. I was shocked to learn when I first started my business that quite a few game stores didn't have it. The guy giving the lecture on business insurance at my first trade show learned the hard way, when a car barreled through his plate glass windows and into his store. Twice. We must submit proof of insurance to our property management company annually. So looting is covered under most insurance policies.

When it comes to physically protecting your property, well, don't. I am not a lawyer, but the law is not on your side if you shoot a looter. Unless you're in Texas, which has the ever so helpful "He needed shootin'" defense that I sometimes wish we all had, especially during Yugioh tournaments. I kid! Don't shoot looters. Standing in your entryway with a shotgun might sound like a romantic and natural thing to do, but spend that shotgun money on a good security camera system instead. Make sure you can export that file and post it publicly for easy looter identification. It works.

That said, nobody ever gets prosecuted for shooting looters, except police. In fact, the real danger of being out during a riot or natural disaster is something called elite panic. In a real emergency, people come together to help their neighbors and recreational looting is rare. In anything but the End Times, you can expect generally helpful people. It's something I learned in my recent Community Emergency Response Team (CERT) training. I highly recommend training so you can help your community in a disaster. It's also a great antidote for fear and paranoia.

With elite panic, government freaks out during these troubled times and overreacts. The elites panic. You're far more likely to get shot on sight by a cop or soldier with shoot to kill orders than you are of defending your business. It's one reason why CERT members wear green, fluorescent vests and helmets.


Elites tend to believe in a venal, selfish, and essentially monstrous version of human nature, which I sometimes think is their own human nature. I mean, people don't become incredibly wealthy and powerful by being angelic, necessarily. They believe that only their power keeps the rest of us in line and that when it somehow shrinks away our seething violence will rise to the surface...  source.

So get business insurance, invest in a camera system and stay home. 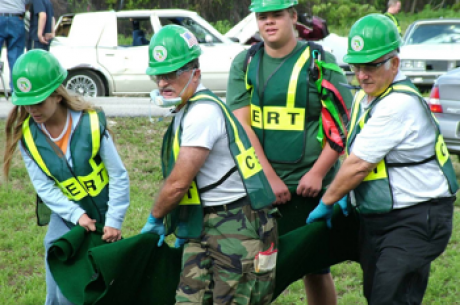