I feel I need a palette cleansing after the last post. Here are the four RPGs that were most influential for me. It's a meme going around #fourRPGs. Rambling and layout atrocities ahead.... 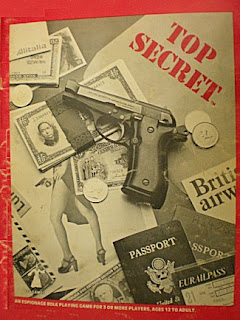 I think we played Top Secret more than D&D when I was a kid. We started with the original box set and moved to Top Secret/SI later.

Some were happy with the rulebooks, but I recall cutting out photos for my character sheet from the Brigade Quartermaster catalog (Brigade QM still exists) and finding cars to buy in the Auto Trader. We would destroy vehicles in that game like you wouldn't believe.

We wanted different firearms too, and I created fake police department letterhead to send to firearms manufacturers, like Heckler & Koch, requesting catalogs for police only weapons, like the MP5 (see the video at the bottom of this post).  I got them too. Kids those days.

It was the more mature D&D of the time for us. Yet, I remember the shame when I ripped up my dead character sheet and pushed it through the slots of the gazebo where we were playing. The gazebo was over a lake, the pieces fanning out as they dispersed. I don't think I ever had that connection with a D&D character. 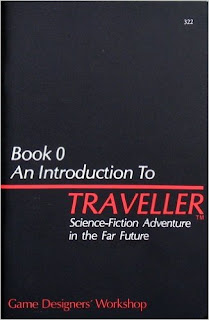 Traveller was a one off for us, and its character creation system, where you could actually die in training, was intriguing. I used to generate random planets just for fun, to satisfy my imagination. I didn't play much Traveller, but it was always memorable.

Like Call of Cthulhu, Traveller usually ended in disaster, blowing the jump drives as the authorities closed in (you would think this was a pirate game). If you don't get why Firefly is a cult favorite, it's partially because it's an envisioning of a sci-fi RPG that may be Traveller. Oh, you know it is.

My favorite character was Baron Mughummlaminarrinarrr, a lizard alien with an incredibly high metabolism. He would raid ships while his slave pushed a shopping cart full of canned food in his wake. He had to eat constantly or die. That's how strange the Traveller system could be. That's where my teenage imagination went. 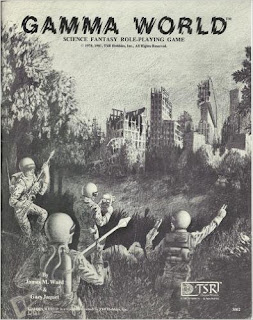 Gamma World tapped into the 80's sense of impending nuclear destruction, long before the current zombie meme. Long before memes. It was mostly D&D compatible, so it satisfied our sci-fi itch that Expedition to the Barrier Peaks wouldn't exploit in D&D until a few years later.

Gamma World was a bit quirky, where Traveller seemed to be more serious, probably because of all the sciency things, like calculating distance between planets and attempting to understand space combat. It wasn't nearly as nerdy as Star Fleet Battles. The uber science geeks in school would play that game, calculating ship positions and firing solutions in 3D space. I'm not sure how that's fun, but they enjoyed it. One of those guys showed up to the high school reunion in his new Ferrari. We always knew you were smart, Brando. 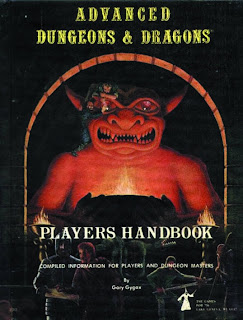 Dungeons & Dragons is where it all started for me. I think I must have had the magenta box set under the Christmas tree in 1981. I mostly messed around with it with my younger brother. It wasn't until junior high school that I found a group of friends to play with, guys who are still friends to this day. That group included the older brother playing D&D in the movie E.T. (an acquaintance really) and the guitar player for No Doubt, who I tormented with my lawful evil priest of Asmodeus named Damien (I was a jerk).

We grabbed hold of AD&D as soon as the books were out, occasionally mixing older supplements, as we found them. With only three books available, we could recite the rules by heart and you could thumb to the combat tables, saving throws or treasure tables by feel.

None of my friends played beyond high school, as far as I know, but I moved on to play Oriental Adventures in college (as an Asian Studies major). Later we played AD&D 2nd Edition at a dot com I worked for; Planescape in the board room.

When Third Edition came out, I swore we wouldn't go to it, but I became an evangelist after reading the Player's Handbook. I could go on here, about the disappointment of 4th Edition, the walking in the RPG wilderness for a while before discovering Pathfinder, and how 5th Edition has been a breath of fresh air.  It's what I play now.

As for my gaming, I ran an urban, planar campaign for ten years (3rd Edition, then 3.5, then Pathfinder). For the last three years I've been running a sandbox game (Pathfinder, then 5th), mostly because I missed trees and nature. You can read about my sandbox campaign by searching for it on the blog search feature.