For quite a while, I've written about how the success of hobby games will create new opportunities but also new threats to independent game stores. Threats come from new players and new strategies to dominate this market. Hobby games is a tiny but growing market, having just exceeded 1.2 billion dollars in sales, according to ICV2. That's a rounding error for some of those seeking to dominate.

Target does $72 billion dollars a year in sales, and they've announced their hobby games are seeing double digit growth. Therefore, it's not surprising to see them twist arms or create deals to dominate the game trade, announcing they'll have 50 new exclusive games shortly, many of which are showcased at Gencon this week. They've contacted publishers and bought out entire print runs of games. It's also  rumored, they've strong armed Cards Against Humanity into selling to them. CAH has already been spotted in the wild at Target. I guess once you stare down restroom protestors, carrying CAH is no big deal. Other upcoming Target exclusives you would normally see in the hobby game channel: 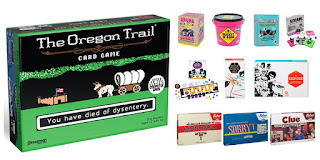 On the publishing side of things, we have Asmodee. They've dominated the fragmented board game market and have become the top hobby board game publisher through company and license acquisitions. Any MBA could tell you the hobby board game market was the last frontier of hobby games, without a market leader. So they've been on a buying spree, the company itself owned by a French holding company that buys things like parking lot businesses. Asmodee now owns the following:

They now dominate the board game market and have reduced discounts for retailers, resulting in the transfer of huge amounts of cash from retailers to Asmodee. I'm estimating that discount change generated hundreds of thousands of dollars for them. My own store makes hundreds less each month because of this reduction.

Finally, Good Games, a store and distributor from Australia, opened their first US store in Indianapolis. Their goal is to put stores in downtown locations in the US. This is their 26th store, so they know a thing about retail. You might not think we should worry about a large chain of game stores dominating after seeing Hastings implode, but the Hastings problem had more to do with mismanagement than market forces.  Good Games is interesting to watch because they've got their hands in every tier of the game industry.

Good Games announced yesterday that their publishing arm, Good Games Publishing, will allow Cool Mini Or Not (CMON) to distribute their games worldwide. The distribution exception is Australia and New Zealand, since Good Games already owns a distribution business there (Let's Play Games). So yes, they're involved in every tier of the industry.

So I've listed some of the threats. Where are the opportunities? Game store owners are fed up with game publishers telling them they're on their side, while crafting side deals, working with shadow distribution systems (PSI), and ignoring their needs in the industry trade group. Everyone wants to be successful and make money at this, but it's clear the small retailers will be at the mercy of larger companies without better representation.

There is no way the small game retailer can leverage their numbers without representation, and we lack a trade group willing to do that. I believe we'll finally see game retailers get organized with their own trade group or possibly a division of an existing organization. This has been tried before, but the timing seems right this time.
Posted by Gary Ray at Friday, August 05, 2016