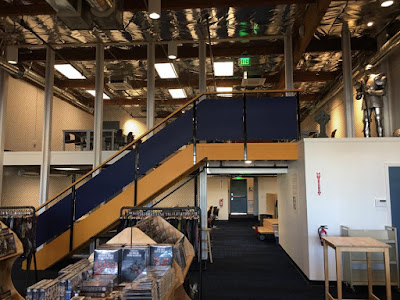 It took two and a half years to get it built, but our new Game Center is complete. If you were reading this blog back then, you would have seen some optimistic plans, such as how construction would be completed within a few months of the Kickstarter or how it was the cost of a new BMW (more like two). We still need to paint our "Wall of Heroes" in the Game Center, but we're essentially done.

When our original construction plan fell through, it turned out I had little to no control over the fate of the project, at least until the biggest financial deal of my life came around, also known as my lease re-negotiation. With a builder and a deal established, we then canvassed out Kickstarter backers and asked it anyone was willing to loan us money to complete the project, which at that point was around double our initial estimate.

We got enough money to get construction started, and funded the rest of the loan as the second payment was due. The third payment is due any day now and lower sales during construction means we've had to do financial gymnastics to come up with it. The project ended up costing way more than even this doubled initial estimate, but we negotiated the cost of the project up front, with the builders taking a huge loss.

I don't want to dampen the excitement about this project. Our hopes are that we can hold bigger events, generate more sales, if for no other reason than to cover the construction loan payments. I'm sure it will more than that though, a long term profitable project. However, right now we're all just tired. I processed our biggest payroll ever this week, as I paid staff overtime pay to get in there and do the final painting. I ruined a pair of pants in the process, which I'm kinda proud of. We are weary but hopeful.

In other words, I need some perspective to judge what we've accomplished, perspective coming from time or from someone outside looking in. As much as I'm not an attention seeker, it would be good to have follow up trade interviews or even a real news story about this project from someone looking in. This Game Center project cements us as the counties premier game store, a hub for the gaming community. If you know any press folks, please send them in my direction. I promise to bring the enthusiasm.

Finally,  we've got a coupon we're giving out for an excuse to visit again. We're in an odd cash flow crunch, where we have free rent for the rest of the year, but we've got about $20,000 in construction related expenses that we have to pay this month. We're beating the drum and trying to get customers to come take a look, and spend a little money of course.

Perhaps what we need is a question and answers post? If you've got questions, please ask them in the comments.