The Struggle is Real (Tradecraft)

I've got five days of cash flow, a huge sales tax payment due, a massive credit card bill, payroll, and the need for a new cars worth of sales in the next ten days. This makes me happy.

"The struggle is real," is a popular meme, but the struggle is often the only "real" part of this business. Success is ill defined. Money in the bank, real money, capital expenditure money, is a rarity for most store owners, at least until they've become well established. The need for things far outstrips cash flow. Entropy is a bitch and she demands replacement fixtures and an endless flow of toilet paper.

We're poor because we just paid off tens of thousands of dollars of construction debt, enough to enter the new year with a sliver of a chance of making it through January without dipping into some form of debt. But it's a pleasant place to be, especially knowing I won't be writing some of those monthly checks ever again. It's mostly pleasant because it removes decisions from my life. You work, you get paid, you pay the bills. We sold the van and tweaked our insurance to save $400 a month. This is the comforting work of the ancestral merchants. Wash, rinse, repeat. Routine has a warm embrace.

It's far easier to obsess over what's in front of you than forecast the future. It's like that person whose always busy at work, who has to constantly work late to catch up with what's in front of them. Those of us who've gone beyond that level know they're just poor planners, that resources haven't been allocated, that they're poorly managed in one aspect or another. It's a weakness of sorts, a comforting one that enshrines them in long suffering work and avoids the complications of social interaction or happiness seeking.

What I should be doing is planning. I should be working on a marketing plan. I should be setting up our demo programs. I should be planning those mini cons I talk about wanting so badly. I should consider a path to a book, but I question the value of such things. I should really find a way to swing the GAMA Trade Show this year. What I really should do is go on vacation. But five days of cash flow, man. I better put my head in the sand and and get back to the grind. 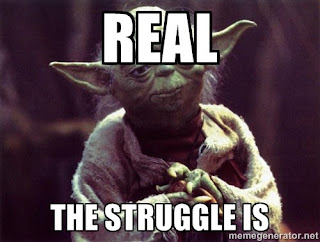