This week I've spent time thinking about writing a book. Let me tell you up front, I find nothing particular amazing or noteworthy about writing a book. I love books. Some of my favorite things are books. But I also have giant stacks of unread books. It's just a written medium, no more important than any other.

I used to publish a small magazine that had national distribution in Barnes & Noble. Part of that role was writing many articles, including when we were short content and sometimes under pseudonyms to hide this fact. Seeing my name in print is no big deal. Seeing my hard work published without credit is no big deal. Writing and publishing is kind of a slog, especially if you aren't making money (most writing). Publishing a magazine takes not making money to dizzying new heights, let me tell you. At least when I'm sucking at running a game store I know right away.

I learned the Ten Tricks To Magazine Article Writing, using lists and other magazine industry crutches to generate prodigious content. One time I wrote a completely fictional article about a Tibetan lama living in the hood, under the name of my Top Secret character and channeling my inner lama. I was just trying to fill pages with something true to my spirit, even if it was completely fabricated.  The article was re-published as a truthful account in Harpers, which I found terrifying and hilarious at the same time. I ended up fielding calls from Leno and Letterman for interviews, or at least interviews with this fictional street smart lama. Eventually the buzz faded and the reality of magazine publishing set in.

To help pay for the magazine, I got an entry level job in IT. The magazine eventually fizzled, doomed from the beginning with no proper research that would have been performed with even a rudimentary business plan. This left me in an IT career during the exciting and ridiculous dot-com days, where I quickly discovered adapting and learning new skills meant new opportunities and compensation. Don't know how routers work? Read a book. Take a class. Eventually I transitioned from IT to owning a game store. I read some books. I took some classes. Here we are.

What kind of book would I write, nobody asked? There are two possibilities. One type of book is a nuts and bolts book, similar or possibly just including blog posts massaged to be helpful to new or existing store owners. There have been books like that before and there are a couple out there now.

The second type of book is a more narrative style, "tell-all" about the trials and tribulations of owning a small business. This has broader appeal. It's also much harder to write and could go in many directions. The first type of book is more assembling existing content in a meaningful way, while the advice I got for the "tell all" is to just write it and pitch it, a more daunting task. The end goal is to leverage this exposure towards consulting, but to be honest, writing is a lot more fun, if there was a path with some modest income.

If you're a publisher and reading this, I'm ready to talk. If you're a reader likely to buy my thoughts in dead tree edition, please let me know what you would like to read. Here are my most popular blog posts, showing that even a cursory review of the Imperial Guard codex is vastly more popular than most of what I write about the game trade. Maybe I need to write Game Store in the Hood. 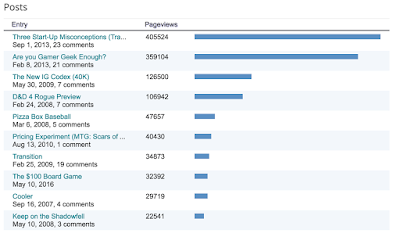