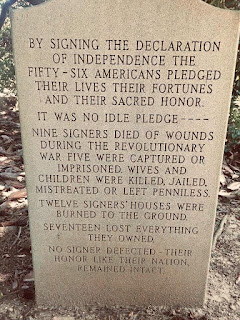 I saw this today. I can't authenticate if this actually exists or if it's just a clever meme, but it struck me as important for a couple reasons.

As a lesser reason, I'm running a D&D campaign where the characters seek independence from a powerful empire. The stone reminded me there is a price to pay for such a lofty goal, and being a role playing gaming, that price needs be paid to accentuate the degree of risk and reward. Empires don't go softly into the night.

The main reason  is this struck me as something understood by small business owners. Declaring your independence from working for others is a glorious thing. However, the price to be paid for such a decision can be high. I know many who lost homes, spouses, or eventually declared bankruptcy. Many forgo higher income levels, shifting down in socioeconomic class, often at the expense of their family. Education for your kids will suffer if you live in a highly unequal state like California, where you home value is dramatically linked to education opportunities. An early death is not unlikely, if you look around, as the hours and the gamer lifestyle is not exactly healthy. We lose them young all the time.

Going back to the stone, I wonder how many founding fathers owned small businesses? It seemed like the kind of risk a small business owner would undertake, and of course be criticized later for being an elite who owned a business. That data is thankfully available. Merchant comes right after lawyer if you look at the list, with 30% of the 56 signers being sellers of stuff. These were men accustomed to taking risks. Some eventually paid the ultimate price, but as a small business owner, I understand the rather unique live free or die mindset. I'm thankful for these 56 who gave me the opportunity.
Posted by Gary Ray at Thursday, July 04, 2019