My first year in graduate school, a young, newly minted professor, fresh out of Stanford, pulled me aside. The conversation went something like this, "Look, you can clearly write well enough to weave your bullshit into a compelling narrative, but this isn't college anymore. Writing in academia requires more rigor. Let's work on that."

I graduated a few years later. My bullshit now backed up with solid evidence and a deadpan, third person voice. It ended up an honors thesis after I applied marketing principles to Japanese concepts of enlightenment. I really couldn't come up with a fifth chapter, so I weaved one last spell of bullshit. I expected to be disciplined, but they totally dug it. The first chapter had been written in that young professors class, re-worked a million times, compared to my rushed final chapter. That first semester I also took a course on Saint Francis, and learned the term hagiography, the opposite of everything I was taught.

Hagiography is the acceptance of bullshit as a legitimate academic category. It's a biographical style in which we have an agenda of depicting the individual in a positive light. In the case of the saints, it's to show how amazingly saintly they are, of course. The purpose is to enhance the faith of worshippers, as the actual lives of saints are thought to be of little significance.

Academics will still try to tease out truth from hagiography, but it's mostly because they need something to do. The question of truth or academic rigor wasn't questioned at the time of these writings. In fact, the idea of academic rigor, the value of truthful reporting, is so modern, there's often no evidence left in the past to tell a competing narrative. Why would you want to keep that around? The dude is a saint, let it go.

I bring this up because I find it interesting that we're in this period when our hobby founders are dying. This is a hobby that's perhaps 50 years old, give or take, and our founders are aging out. Their stories have been told at conventions, in game stores, around gaming tables. They are spoken of as gods among men. Their writings have been analyzed and scrutinized. Gary said this before he said that, obscuring himself behind a filing cabinet while he said it, or written in a Dragon magazine column. The hagiography is strong, especially when we have aggrieved parties and those around them attempting to cement their legacies. There's a tendency to exaggerate to make a point.

Lately we've had a series of books attempting to tell the true history, back and forth we go. Truth is relative. Hagiography is rampant. What we can see clearly is our heroes are flawed. Villains can sometimes save the town. I think we need to avoid making oversized heroes out of our founders. What they intended the game to be is less important than how you took it, synthesized new information, and made it your own. It's a bit like academia that way. What have you contributed?

They gave us a gift, sold it to us really, over and over again, a product to do with as we please. It belongs to the world now. We owe them thanks, but I think that's enough. They weren't saints. Neither were they villains. 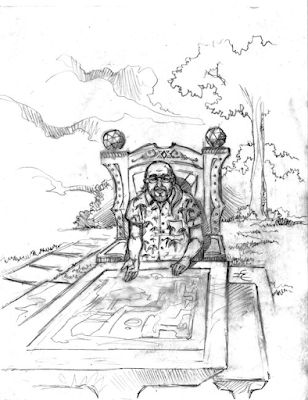