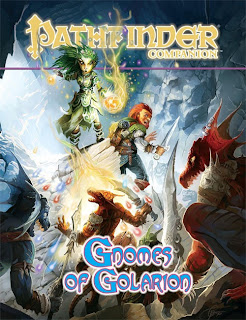 I resisted picking up this book for quite a while. It was recommended by numerous friends and customers, but like many of the people who playfully ridiculed me when I announced I was reading it, I had a dim view of gnomes. Gnomes haven't had a solid place in D&D mythology. They were an add-on race, not quite the hobbits (halflings) and dwarves we know and love, and definitely not like the various flavors of exotic elves. If halflings were rogue-like and dwarves were fighter-types, the gnomes were meant to fill a magical role. Worse, they were associated with the lame: illusion magic (AD&D) and bards (3.x). They were instantly despised by everyone I knew. Then there were the tinker gnomes of Dragonlance, the Ewoks of that series. Man, people hated them. Gnomes were literally in a deep hole and thankfully, Gnomes of Golarion digs them out.

Gnomes are fey, we learn. They come from the First World and are forever doomed to seek out new experiences or risk a horrible curse. This curse, called The Bleaching, drives the gnome towards new experiences and justifies their manic behavior. Stop seeking out the new, and The Bleaching takes you. The Bleaching is the average gamers worst nightmare: becoming a dull, middle aged, white guy. You can literally die from boredom as the color leaves you and you fade away. Take it from me, it's a nasty curse. A chapter on The Wonderseekers, those who try to save gnomes from this potentially deadly funk, provides for both a new Pathfinder faction and some great character motivation.

Everything in Gnomes of Golarion is centered around The Bleaching. We get a full evaluation of gnome culture and behavior based on this driving force. It all begins to make sense as we see manic gnomes, deeply devoted gnomes, and highly creative gnomes. There is every level of experience seeking, including the sexual (hooray for adult Pathfinder), with the exception being dull repetition. Expect great things from a gnome artisan, but not anything you've seen before. They take lovers of various races, but tend to tire of them quickly. We learn that when you want artistic inspiration, you find a gnome. Let the dwarves handle the solid, run of the mill stuff, like bridges. Everything a gnome does is related to this search for new experience so they can avoid the curse of The Bleaching.

To envision what a society of such gnomes would look like, we're presented with over a dozen gnome settlements. We've got gnome holy sites, underground gnome hideouts, tree villages taken over from elves, and my favorite town, Umok, a secluded woodland village in which the gnomes have befriended the forest animals to protect them and give warning. Gnomes, like other Pathfinder races, aren't all pillars of virtue, so we have gnomes deeply enmeshed in the drug trade (pesh), gnome arcanists in Cheliax that support the Church of Asmodeus, and other interesting moral compromises gnomes make for their survival in the world of the bigguns'. This section is perfect for dropping in a gnome settlement during an adventure. If the party is looking for something interesting and creative, it's likely in a gnome town. Anyone playing a gnome will probably choose one of these interesting places as their home.

The section on weapons was inspired, although I would have liked to see more artwork. The thunderstone powered devices and Flask Thrower are fantastic. The section on the gods is well done, re-contextualizing gnome beliefs based on their new central premise. Finally, there are rules for The Bleaching, including using it as a curse if players don't properly play their curious gnome. You can also play a Bleachling, that dull, middle aged, white guy who wants to be left alone with his lawn (they develop a new propensity towards druidism).

The book is a slim 32 pages and retails for $10.99. Gnomes of Golarion provides a role for gnomes in the Pathfinder universe. They're no longer that expansion race, another annoying little guy. They remind me a bit of how the high elves were made into Eladrin in D&D 4, yet the gnomes of Golarion are now firmly rooted in this world, at least as rooted as any gnome can be. Am I inspired to play one? Are you high on pesh? No, but I can definitely appreciate a free spirit who wants to properly take one on. 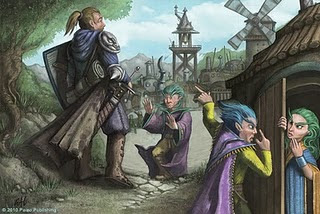