The big retailers are predicting a pretty good holiday season, and the economists (who we now know are completely full of crap), believe recent retail numbers indicate the same. The retailers are what interest me. They're finally dialing in what the average consumer is looking for in the new, post-boom economy. We only encounter these consumers once a year, in December, so I've started paying extra attention to the big stores after getting seriously blind-sided in 2009 (despite great sales).

Last year we experienced what a lot of big retailers already knew: we had too much inventory and not the right mix. We had stocked up for a hesitant but still feeling wealthy 2008 consumer, but ended up with a skittish and impoverished 2009 consumer. It should have been obvious. All I had to do was check my own balance sheet. However, our sales don't correspond with the feelings of the general public. Hobbyists were fairly unfazed by the recession, at least those who still had jobs. They changed their buying habits, but they still bought. We had some national crisis moments that tanked our sales, but in general, they were up in 2009 by quite a lot, with 2010 very healthy as well.

Big retailers this year are hopeful because they've burned through all their dead inventory and have fine tuned their offerings. I would like to think we've done the same thing, or at least plan to. A lot of big stores have discovered that focusing on fewer things and even shrinking their stores provides a better shopping experience and saves a bunch of money. It's all about the bottom line now.  Gross sales and market share are for suckers (remember the dot-com days?). Game stores could learn from the big boys. Dead inventory is an impediment, and I'm constantly balancing selection with efficiency. Do I really need five lines of paint brushes and every D&D product, or could I actually make more money with less? The new mantra is less is more. We'll be cautiously heading into the holidays and stocking up only when warranted. Overstock is for the gross sales crowd.

Changing size is something we're working on as well, hopefully adding some significant space without significant cost. If that doesn't work out, there's a chance, a couple years from now, that we right-size the store in a different location. I'm hoping it doesn't come to that, but the savings out there right now are astronomical. I've been joking lately that the only real money in game stores comes from rent negotiations. 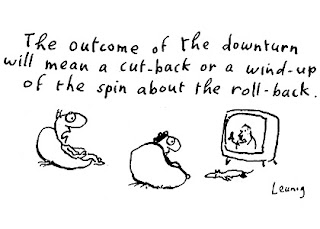