I've been doing a year in review for Pathfinder and Dungeons & Dragons. It's been a volatile year for us in the role-playing department. A lot of mid-tier game systems have "gone zombie," with our customer base decreasing and sales flagging. These games seem to be headed for online-only sales. Meanwhile, all our FATE based games remain very popular. As for Dungeons & Dragons, it has been our worst sales year since I opened over six years ago. That said, it's not all doom and gloom when you include Pathfinder in the numbers. 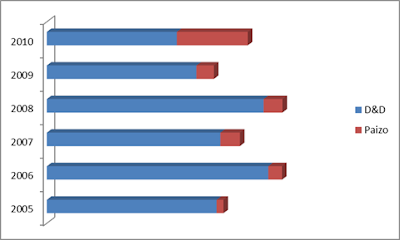 Adding Pathfinder to the mix brings overall "D&D" sales to an average level for 2010. Now that we treat Pathfinder equally, stocking the full line like D&D, vowing never to be out of stock on anything like D&D, and considering it a valid option like D&D, we then have to ask, are we cannibalizing sales? The answer is most likely. But that's fine. We're not a Wizards of the Coast store, we're an independent retailer looking to fit the right game to the right person. If everyone is properly fit to the system best for them, it means we should see sales grow as they return for more.

So what about D&D Essentials? It's true Essentials has re-invigorated D&D 4. There's a lot of new interest in Essentials, as it adds more flavor and options to the game. Does it go far enough? Don't know. Before Essentials, Pathfinder core rulebooks were outselling Player's Handbooks at a 2:1 rate. With some finagling of the numbers to account for the various Essentials books, it's at parity. Still, overall growth for D&D is flagging, with back list products languishing while Pathfinder holds steady. Worse, there's a sense that some of the D&D accessories may be obsoleted by Essentials.

What has really been surprising is turn rates. D&D turn rates are down about 20% from previous years, which is no surprise with lower sales, but Pathfinder overall turn rates remain very high.  It was a big gamble to bring in every adventure, every tile pack, and every accessory. When we carried a few of each of these, they sold extremely poorly, but in aggregate, they rock. Two thirds of Pathfinder sales are rulebooks, which are only four of over a hundred products, yet overall turns for Paizo products are almost as good as Dungeons & Dragons, which is rulebook heavy. Our D&D turns are at 5.1, while Pathfinder is at a surprisingly good 4.6. Really good turns are considered around 3, and most retailers expect far less from their RPG departments (small press games hover at around 1.5 for us, for a low end example).

This means that, on average, every Pathfinder book we offer sells 4.6 times each year. In reality, core rulebooks sell something like 40-50 times and many supplements sell only once or twice in making up this average. However, I would postulate that you can't get those 40-50 sales without selling those slow selling supplements. It's something retailers know about Dungeons & Dragons or their 40K department. Shock and awe is the strategy, and it creates this "top of mind" position for your store in the heads of your customers. Will Black Diamond Games have the latest D&D or Pathfinder supplement? Hell yes, every time.
Posted by Gary Ray at Tuesday, December 21, 2010