I was looking back on CCG sales, comparing 2009 and 2010, and not surprisingly, it looked pretty much the same, with the exception that a lot of lingerers finally expired. Then I was thinking, since we expanded the category to include Living Card Games (LCG's), originally established by FFG to find a "living" home for CCG properties that couldn't survive the brutal format (and then to introduce new games), what if we expanded it to include deck building games, like Dominion?

Dominon has not become the methadone for Magic that many had hoped (or feared). Our Magic players looked at me like I was cracked when I explained it to them and suggested they give it a shot. Why? I think because it came from the board game world, in a board game box, pitched by an aging guy who is not one of them. Heck, Dominion won board game of the year in Germany, a big boon for sales to board gamers, but  also confirmation that it is "not from our world" by the CCG crowd.

I am more sure of this now because a LOT of them have tried the Resident Evil deck building game, arriving tomorrow, and many have pre-ordered it. Resident Evil is made by Bandai, a company that does edgy CCGs. Bandai sent a kit to our local Bandai event organizer, a guy who has been getting people interested in Naruto and Battle Spirits for years. His Resident Evil demos have resulted in far more early interest than Dominion ever did, and across a wide spectrum of our customer base. So want to get CCG players to play your deck building game? Stop selling it like a board game.

Personally, Dominion doesn't scratch my Magic itch. It lacks the kind of crunchy deck building obsessiveness of Magic, that activates the pleasure center in my brain. It's the same button that gets pushed when I spend two days "crafting" a Pathfinder character, compared to "making" a character in D&D 4. It's just how I'm wired. Great games, all around, but they don't do it for me.

So here's a chart showing all card playing activity lumped together. We know the CCG model is money if you can get your foot in the door (that door is mostly closed). We know that LCGs are a tough road, but can work with a hot property. Now you can see how self proclaimed deck building games do for us. I say self-proclaimed because I don't know that we've really defined the category very well (feel free to comment on their characteristics below). 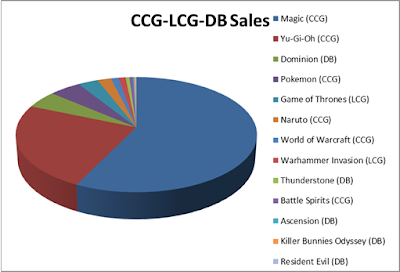 SNF, Stuff Not Magic, is still not a big part of the pie. Everyone has pretty much accepted that Magic has won at this pont. Magic is the Coke of the CCG market, with the unassailable lead (Yu-Gi-Oh is our Pepsi, The Choice of a New Generation®). LCGs and DBs are attempts at innovative card games with more stable revenue and less risk than trying to break into a mature market. Dominion might be a sensation in the board game world, but as you can see, it's third tier when dropped into the CCG market. Still, I have a lot more faith in a slow selling, stable DB game than a third tier CCG that could burn out at any moment.
Posted by Gary Ray at Thursday, December 02, 2010