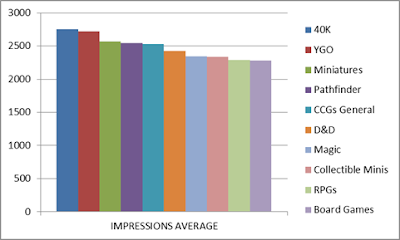 Anyone who uses Facebook for their diverse business has to wonder if what they post has any relation to the interests of their customers. As I began to focus away from Facebook and towards Google Adwords, I was surprised to learn that the actual search terms people looked for in relation to my business had very little to do with what I was trying to actively advertise. Poker, bingo and Pokemon were our top search terms, things that were not top games in the store. Meanwhile, I had carefully crafted Facebook ad campaigns for my top selling games, that few people on Google ever searched for. Now that Facebook has some very basic analytics for looking at impressions, it has become painfully obvious that what I post on the store page and its frequency is not always aligned with the interests of the readers.

Board games make up the majority of posts, mostly because there are just so damn many of them. With over 1,000 in stock, and steady rotation, it's not unlikely on any given day that we received a new one. And why not advertise it? Well, apparently because board games are the least interesting thing to our Facebook fans, most likely due to demographics (an older crowd).

RPGs are likewise an older group, although when you pull out Pathfinder and D&D and look at them individually, there is increased enthusiasm for those top brands. Pathfinder enthusiasm is higher than D&D, despite sales of D&D being 2:1 in comparison. We know that and it's what drives a lot of posts about Pathfinder.

Meanwhile, our very young Yugioh crowd, which gives the impression of not paying attention to anything we say, including life saving instructions, actually pays a LOT of attention to our Facebook Yugioh posts. Again, there's a big demographic component to that, but there's also an awful lot of them. This contrasts to our Magic posts. Magic is our number one game in the store, but with an older base. Relative staff indifference to Magic has always been driven by a perceived corresponding lack of enthusiasm of most Magic players to what we do in the store. It's what makes us think they're mercenary, right or wrong. I wonder if it's how most approach the game, as a pastime rather than a hobby. Does the casual golfer really care about the daily happenings in the local sporting goods store? Probably not.

What you don't see here are the quantities of posts. CCGs get much fewer posts while "deserving" far more based on these findings. Board games, as mentioned, are hugely over-represented. RPGs likewise get constant exposure without a commensurate level of interest. If we actually posted on Facebook based on sales and Facebook interest, you would hear an awful lot about CCGs and miniatures, especially Yugioh and 40K. Mis-aligning our marketing with the interests of our customers is something we do at our peril.

What gets the most impressions? The number one top post is a photo of our board game clearance cart. Mmmm, I love the cart. Second was this weeks scoop photo of the Pathfinder starter box I took at the Gama Trade Show. That's right, a cart of clearance board games got more exposure than a photo of a pre-production game that got re-posted far and wide. Also, anything specific to the store and not a new release gets more exposure than straight business marketing. This is what the experts will tell you and they're right. It's tempting to put out every new release on the feed, but there's an obvious fatigue and lack of interest in doing so.

Finally, all these impressions are pretty high for a game store and that comes from our very high fan count, third in the world for game stores. That high fan count, over 1,500, likely includes a lot of folks who have only the slightest interest in what we say. Sometimes I'll drill down on the dozen or so "likes" on a post, looking at the user profiles, only to learn that none of them are residents of California. I'm glad they like what we're saying, but I can't deceive myself that it means anything.
Posted by Gary Ray at Saturday, March 19, 2011