For the last few years I've looked at the "market share" of our miniature games, which is generally an indication of what people are playing. Here's a look at what we've got: 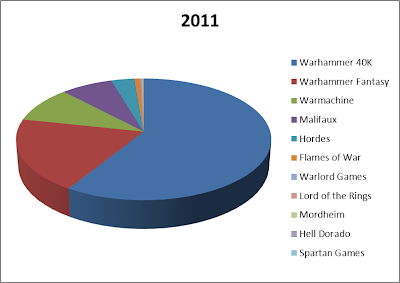 2009
The big news between last year and this year is how we dropped, after much painful deliberation, Flames of War. You can see the tail end of our clearancing out FoW in the top chart. So how are we doing overall with miniature games after that painful decision?  Our profits are up 5% in the department. We were just too weighed down with a lot of dead lead, both with Flames of War and a lot of little "throw it against the wall and see if it sticks" miniature games.
For the most part we paired down our miniature games to what was getting played in store, much like we do for CCGs (with an exception or two). For 2011, after the top 5 games, the bottom 6 games are practically invisible. When looking at a pie chart, this would mean that the established games grow in their percentages, which can be deceiving, since it doesn't necessarily mean they sold more, only that there's more pie.
You would think that as our store grew larger, our selection of games would expand, but strangely that's not true. Part of this is because inventory becomes less manageable, cash flow is hampered by useless stuff that nobody wants and inventory mistakes become more painful and downright dangerous. We're a business, not a museum or an art studio. So we tend to take fewer risks, which is good and bad. It's good because we focus on efficiency and profit, which keeps the store alive and the stuff that everyone wants on the shelves. Do you really want us to run out of a top game so we can carry some resin junk that nobody buys? It may be pretty, but it's no way to run a business. It's bad for obvious reasons because we hesitate to try innovative new things. Innovative new things means pain of some sort. I can't promise you we'll be more innovative, but at least I'm aware of the tension. I aspire towards innovation.
At this point in discussions internally, we usually start talking about Privateer Press. Privateer Press, since they never get rid of anything, suffers from similar problems we had with Flames of War. The inventory is inefficient. There are too many SKUs for too few players.  This is what everyone warned me about with Games Workshop, but they're actually ruthless with their inventory control. I understand Games Workshop. When it comes to Privateer Press inventory creep, it means we pare back our offerings, which reduces sales and drives customers away, probably online, which results in paring back our offerings in a vicious circle. It's what happened with Flames of War as well. On top of that, SKUs are often gone for long periods of time at all the distributors, making carrying the line a rather haphazard endeavor, again, sounding a bit like Flames of War. I really hate this about Privateer Press. Their numbers look very much like Flames of War, both in sales and inventory efficiencies (or lack thereof). So are we going to drop them? No.
Here's why: Unlike Flames of War players, Privateer Press players are cross-genre gamers that buy regularly from other departments and other miniature games. Carrying Privateer Press is a service to our customers who buy other things that make us money. It's kind of a loss leader of sorts. Come in and buy some cheap tires and we'll sell you some profitable wheels while we're at it. We could painfully jettison our PIP customers if all they bought was PIP, but they buy lots of other stuff, so we compromise. We also have a minimal level of organized play for Privateer Press (Sunday mornings) and although it's rather sad and sorry, it exists and does drive some sales.  If you buy Warmachine or Hordes in our store, you will get to play. We couldn't say that about Flames of War.
Posted by Gary Ray at Thursday, April 21, 2011