Amazon is the Devil 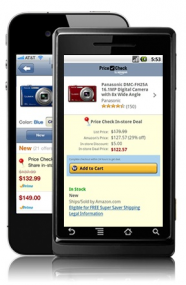 Amazon existed before I had a store, so it was part of the eco-system when I entered the retail gene pool. I accept this. Sure, they've wasted a billion dollars of investor money to become profitable, taking a decade to do it, but hey, that's their business. And sure, they desire to evade sales tax and deprive states of much needed revenue to fund schools and public services, but hey, that's really a battle between them and other big online retailers and it's likely going to take a government solution. I've weighed in on that, but it's not really about me. However, this week they've gone a bit too far.

This article talks about how Amazon is encouraging customers to visit stores, scan items, walk out and buy online from them. Now that's just plain wrong. Here's something I learned when I was younger. When you enter a business and engage a sales person, you have entered into a social contract where it is expected that both of you are acting in good faith. The sales person honestly and factually attempts to assist you, while you have intention to actually buy. It's alright if you're "shopping around," or not ready to buy, but the intent should be that the sales person has a chance at some time in the future.

The assumption is that you're not wasting their time, stealing from them. It has always been this way. I had this explained to me by a car salesman who I had wronged, not giving him a chance to even negotiate on a car that he had spend time with me looking at. It took some giant brass balls for him to tell me this, but I credit him. I bought the car from someone else on a whim and had brought it to his service department. I was oblivious to these kinds of social constructs and I was in the wrong. It's what happens when you're focused entirely on the price of things and are oblivious to things in life with actual value, you know, like people and communities. It's a pitfall of being from an online generation.

Other things you notice as a store owner. People will walk into a store and not say hello to the person there, or if they do, they see that friendly hello from the store employee as a cynical ploy (thanks Wal-Mart). People assume assistance from sales people is likewise a cynical job requirement of the employee. My usual question: Are you finding everything alright?  The usual answer: an instant, pre-programmed yes, followed by, well no, I'm looking for.... We're losing our way as a society when basic social constructs like this break down, when a "hello" becomes a loaded threat.

So this is what Amazon wants you to do. They want you to walk into a store, waste the time of the employees of that store, crap all over the social contract, use the store to research your wants with no intention of buying from the store, and then shop at Amazon. It's a scummy thing to do. It's wrong, immoral, and hopefully you can see where a store owner would be outraged at this. It's not enough for Amazon to systematically gut various brick and mortar industries with the help of Wall Street, in an incredibly inefficient manner, moving on to the next trade after they've sucked out the marrow from their victims. They want more. They want to draft you into their war on local communities, on local people. Do me a favor. Don't be that guy. If you're going to shop Amazon, shop Amazon. Just leave the brick and mortar stores alone.
Posted by Gary Ray at Friday, December 09, 2011