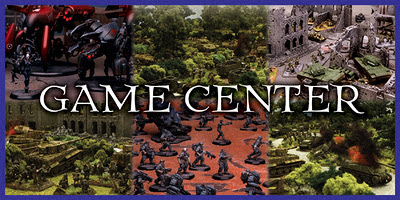 My lust for an unaffordable performance upgrade on my car got me thinking about the various stages of game space in a game store. Most stores will have a fixed game space for their entire lives. If they move, they might upgrade. Upgrading in place happens sometimes, often by taking over adjacent spaces. Sometimes you can go up or down as well. We're considering upgrading our game space next year in some fashion or another. Here's how I see the various game space stages:

Stock. That's it, you've got stock and no game space. You can run a game store without game space on pure retail principles. You can do it on a 9-5 basis. You don't have to be in a shopping mall to do it. You don't have much of a community, except those who appreciate you having things on the shelves. I did this for several years and I could have made a very modest, limited living from it. From talking with other store owners, I think stores that start without game space do better when they finally get it (not that I would recommend you go without it). They're forced to face retail head on, rather than chasing easy sales from events. They're better rounded retailers. No department is really hot in the Stock stage, so you learn to sell everything equally well. The car equivalent would be telling someone the best performance upgrade they could buy is driving school.

Stage 1. This is what we have now. After a bunch of research, I figured if we could accommodate around 60-70 people, we could run most single events, and sometimes two small events simultaneously. I thought this was the sweet spot for most game stores when I researched it, and I still do. However, now I want higher performance (to continue my car metaphor). I don't want to be most game stores. For us, Stage 1 has been 1,000 square feet of game space, custom made by dividing our retail space. Some stores will use temporary partitions and shelving with wheels to accommodate events of this size.

Stage 2. In stage 2 you can seat roughly twice as many people as Stage 1. Let's call it 125 people. Stage 2 means you can run two full events simultaneously. You can run mini-conventions. You can run the next cut-off for CCG events. If you see yourself as more of a regional hub, you want Stage 2. The cost of this is usually prohibitive though, and you can't really fake it with partitions and other tricks. I can't imagine going this route unless you were:  a) very well established (AKA profitable), or b) not paying full retail rent for your game space, or your rent was already on the low side. Stage 2 is my desired next step for my store.

Stage 3. This stage can seat 250+ people. Now you can run everything in Stage 1 and 2, but also the big events, like Yugioh regionals, very large Magic tournaments, and you might even be able to convince manufacturers to run events in your store that might have been run in a hotel. My guess is people will come to you with event ideas. Very few stores do this. It's serious high performance territory and if you're a retailer and know of stores like this, I would love to hear about them. My Stage 2 plan will hopefully include the option for Stage 3 later on, like most automotive performance packages.
Posted by Gary Ray at Tuesday, November 29, 2011