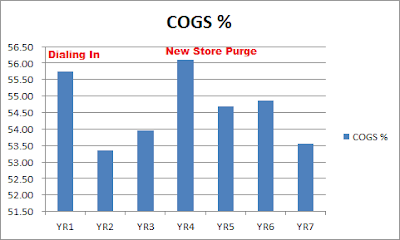 In the category of charts only a retailer could love, I've been tracking my cost of goods since opening. The general cost of goods for the game trade, in a mature store, is around 55%. Our discount (AKA margin) is 50% for most things, 45% for Games Workshop, and sometimes as low as 40% for CCGs like Pokemon and Yugioh when we have to buy from distributors (it's higher direct). Magic is pretty close to 50% by the way, which surprises many people.

Despite this 55% baseline, what really effects your COGS is how you liquidate inventory and improve your numbers with low cost of goods items, like used merchandise and things like Magic singles. What this chart really shows is efficiency, or lack thereof. Our first year involved dialing in our product offerings, so there were occasional sales as we dumped product, selling at a discount, which raised our Cost of Goods Sold (COGS). Subsequent years saw more stable growth.

The new store likewise saw a purge that lasted for many months. Our plan to sell toys failed due to not fully understanding the market and the recession and we only survived because our game center drove sales tremendously. The transition out of that bad inventory took a while and only in year seven on the chart do you see stability. Every toy dollar had to be slowly converted to a game dollar. Making bad purchase decisions is costly, and often deadly for retailers. The corpses of dead stores are filled with these bad decisions and I often feel areas of my store are necrotic.

Not in the numbers are items with no calculated COGS, such as used items and Magic singles (ding & dent gets included). It's mostly a wash, although our Magic single sales in year seven really took off as we got serious, tripling in sales from 2010. It's still a tiny portion of overall sales, but it would account for at least 1% of COGS if it was included.
Posted by Gary Ray at Thursday, March 01, 2012