My Gaming II: Building the Sandbox

I was intimidated enough with the concept of "world building" that I left it for last in my Pathfinder sandbox campaign design. I could tell you about every square mile of the island the PCs were on, since I spent two months writing about it, but I didn't know the name of the nearest trade partner. I was alright with that, since I didn't plan on them going off the island. In fact, it was one of the two "rules" from the beginning: you can't stay in town (I was tired of urban campaigning) and you can't leave the island. So of course, in the first session, they acquired a boat. My players are very clever sometimes (in fact, if you're one of my clever players, please don't read any further).

I could have just said no, but my curiosity got the best of me, so I started looking into what was out there, and most importantly, how I was going to represent that in my gaming materials. It turned out not to be as daunting as I had thought, and mostly because of one piece of software, Fractal Terrain 3 from Pro Fantasy. I shied away from it at first because I know the reputation of Campaign Cartographer, a program compared to AutoCAD that supposedly has quite the learning curve. Fractal Terrain 3 is nothing like that and best of all, there is a free demo that's almost entirely full function (I ended up getting a license after I finished this project).

The program allows you to create a world much like computer games like SimEarth. You give it some parameters, usually deviations from how Earth behaves, and it creates a beautiful world map for you. If it doesn't make something appealing, you randomize another world or tweak parameters. I did this a couple dozen times, but mostly because it was so fascinating. You can tweak the numerical settings until you get one that works for you, with the right amount of ocean, altitude, and land mass size and type. It's really pretty easy. I went with a bunch of narrow (but quite large) islands with no large continents, as I had always intended to run a nautical campaign.

The next step was figuring out how to lightly shoehorn my vision into this terraformed world, which involved some terraforming by hand and various tweaks that took the bulk of my time with the program. Really this was something I had in mind from the beginning. Does this look like what I want to do? No? Randomize! When I was close to being finished, I even gave it an orbital bombardment to fit my post apocalyptic world (quite a few bombardments, actually).


As mentioned, Fractal Terrain 3 has the option to dump this file directly into Campaign Cartographer, but I wasn't interested in that. What I did next was pretty simple, I dumped it into Microsoft Paint so I could label it.  No Photoshop or GIMP, just plain old Windows 7 Paint. 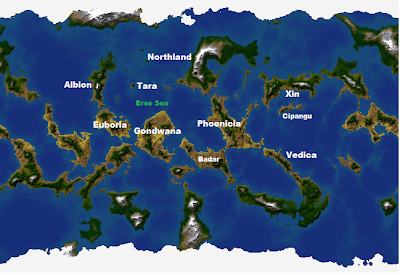 This got my world map pretty well established after maybe 6 hours of goofing around (nothing resembling work), and as you can see it looks pretty darn good.

Following this, I zeroed in on the region we were planning to play in and created the various countries and city-states I needed, even consulting a couple friends from the California Maritime Academy on ocean trade routes. Bottom line: in ancient times, trade routes were primitive, followed the prevailing currents, and generally involved individual traders going to maybe one or two ports repeatedly. Ships had oars, they stayed close to shore and generally you don't need to worry too much about this in your design. Keep it simple. In other words, there are no massive routes of goods flowing like a highway, at least not until around the 1400's.

The key for me is that trade felt organic and there weren't any obvious unrealistic problems. The guys critiqued my map, mentioning how hard it would be to even find some of my smaller island nations with the scale of the map. Or how difficult it might be to get to certain areas at certain times of the year. They made enough suggestions that I tweaked the geography a bit to create way points to where I wanted trade to go, and goods that were so important that traders would make the effort. Places that were backwaters actually had reasons to be backwaters now. 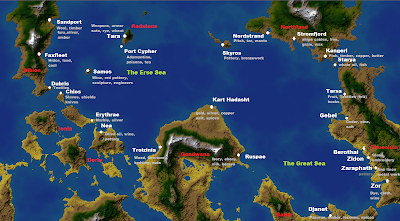 From there, you can see I've got a couple dozen cities and four or five dominant cultures based in history. The next step for me was a quick run down of each town, a gazetteer. I've become increasingly reliant on the GameMastery Guide settlement system, including the online creation tool here. I also found an excellent electronic book called Cityscapes, by Skortched Urf Studios, that includes additional settlement attributes and more examples. It was the best $4 I've spend in a long time and I wish they would do another one.

Occasionally I would go back into Fractal Mapper 3 and add some details of an island or region, usually because I had made an effort to describe it and a map would be handy. Again, very simple stuff that I marked up in Paint. 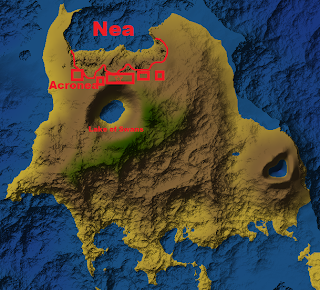 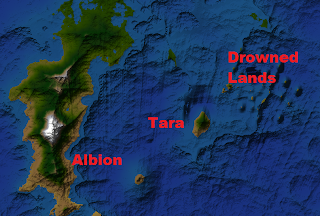 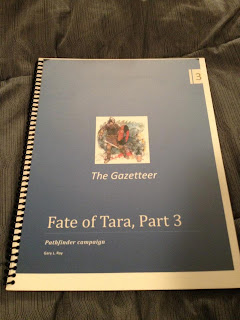 My Gazetteer is nothing like a professional publication, such as the Golarion Gazetteer by Paizo. It's the notes I have for each city-state and the settlement stats. Most of my cities are based on ancient cities that no longer exist from Greece, Phoenicia, ancient England and the like, usually places so old that there's very little known about them except some interesting mythology. The advantage here is I can change the name (usually just using the native name that nobody has heard of) and basically summarize the city from its Wikipedia entry. Usually something sticks out about a town or city that ties into a settlement attribute and then you've got some intrigue. Each city also had to address how they handle the main "curse" on humanity in my campaign, which usually created the more fantastic elements of the town. It's easy to forget to "add fantasy" as you're world building.

I should also mention that geography and culture are obviously linked. If you put your Vikings in the tropics, there are going to be some verisimilitude issues. Likewise, wine culture and trade is so important to my Greeks, that they had an obvious geographical area for placement. I often worried about whether my "Africa" was hot enough and if my temperate zone islands were too far north. It's something you just need to eyeball and if it's close, do some hand waving (or use Fractal Mapper to tweak the climate in the case of my North Africa).

Anyway, super easy software that shouldn't be daunting for anyone. The frustration is likely to come with Paint, if you don't use it often.
Posted by Gary Ray at Thursday, March 22, 2012