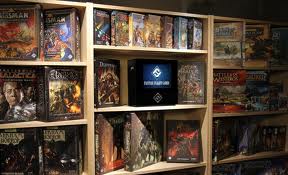 A new addition to the store this week is a second iPad kiosk, this one playing Tabletop videos with Wil Wheaton. It promotes some of the best that hobby board games have to offer. This is not our first device, that being the Fantasy Flight Media Center, which does a great job of promoting their games on the other side of the store. The FFG Media Center was criticized by many retailers who didn't believe it would increase their sales. That might have been true for them, but the Media Center works wonders for us. 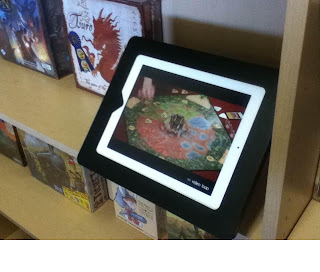 Fantasy Flight does "American Style" games, meaning rather complicated and long, which in my mind is not an easy sell if I haven't played them.Their Media Center does part of the sales job for me. Likewise, Tabletop has been shown to drive customers, non-gamers mind you, to the store, at least when Target isn't carrying a game.

The recipe for our Tabletop iPad kiosk was simple by the way: Buy an iPad, a compatible iPad enclosure of whatever flavor suits you (check Ebay), and an inexpensive app. We used Video Loop for $2.99. The videos are downloaded from YouTube and imported into iTunes and we're mostly done. 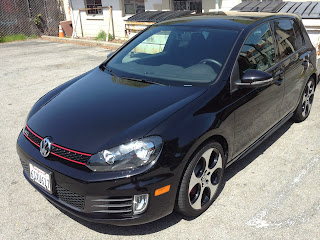 In addition to these devices, we also have two Yugioh Duel Terminals. These are quiet during the day, but can get a little noisy on the weekends. Again, these devices were criticized as a questionable return-on-investment by many retailers, It was thought to be far too risky. For the most part, they've worked wonders for us. They've made back their initial investment and have been making us reliable profits for most of 2012. Duel Terminal 7A with software and new cards releases Friday. Rather than show you a photo of the Duel Terminals, I'm posting a picture of the car I bought last Summer, as I justified the car payment with the new Duel Terminal revenue. It was a good decision (I'm looking at you cranky retailers, remove stick from mud, get new car).

Finally, our newest addition, arriving this week, is a bit more quirky. As a kid, video games and arcades were a big part of my life and my father is a big pinball machine fan. We had two commercial pinball machines in the house growing up. However, the pinball machine that had the biggest effect on me was Black Knight, one of the first digital models. It would taunt you as you played, or even walked past. Black Knight also had a fantasy theme, where most pinball machines had themes that didn't interest me. It wasn't surprising, since it came out in 1980, when fantasy gaming was taking off. 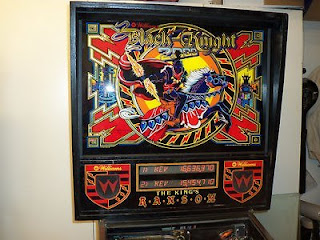 After watching an excellent pinball documentary, Special When Lit, I was inspired to hunt down that Black Knight. It seemed like the perfect themed addition to the store. Adding more atmosphere is always on my mind and I'm constantly looking for new ways to spruce up the store, like with our suit of armor. So without much work actually, I found a Black Knight available for purchase in California. This one is a Black Knight 2000, about 9 years newer than that original Black Knight, but complete with angel chorus and taunting knight.


I'll note that The City of Concord has laws about our various "arcade" devices and we're good as long as we post legal notice about using them during school hours and as long as we have four or fewer devices (otherwise, we're an arcade with special rules and restrictions). Most cities hate the idea of an arcade, especially in their downtown areas (we're just on the interior border). Darn kids with their skateboards and Rock 'N Roll.

Finally, the main concern: noise. One reason why people like our store is it's comfortable. I built it, spending a lot more money than usual, partially as a refuge for myself. The last thing I want is an inhospitable place to work. Noise is a big issue then, and noise experts can measure such things. It turns out a constant din above 60 decibels is bad for your health. It causes stress and stress will kill you in the long run. So 60db was my target. I came up with the idea of noise management over a cup of coffee at Starbucks (75db).

Armed with one of the many free decibel monitoring apps on iTunes, I set to work on the store. Our Tabletop iPad was clearly too loud, Wheaton was getting on my nerves more than usual, while our Duel Terminals were very quiet in demo mode. The pinball machine will likely need to be tweaked as well. Overall though, right now, with music in the background and talking from the iPad kiosks, we're hitting our 60db target. So there you have it, useful and interesting digital devices in our analog environment, hopefully tuned to maintain our positive atmosphere. 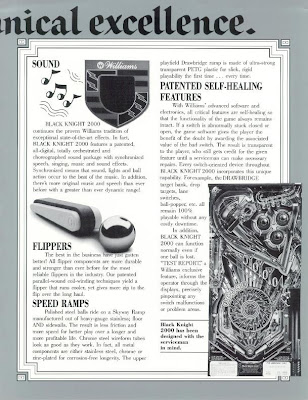