I want to clarify an important thing about yesterdays post that has everyone's panties in a bunch. My decision to avoid Kickstarter products, does not come from emotion. It does not come from a philosophical difference. It does not come from a dislike, fear, or any sort of annoyance with publishers of any size. I like you guys and have supported a bunch of projects for my store and have attempted to be helpful in promoting the medium. I still have nine projects I supported for the store in the pipeline. There is only one reason I'm avoiding Kickstarter derived products: It doesn't make me money.

When I say Kickstarter projects don't make me money, I'm saying nobody will buy them in my store, mostly at all, sometimes ever. I'm willing to accept slow turns for the sake of fringe, but no turns?  Products and lines that weren't Kickstarter that now are Kickstarter have stopped dead in their tracks for me. These are not only the products that I've brought in for my store through Kickstarter, it's any product that got its funding through the Kickstarter process and then made its way through distribution. You're doing a good job of hitting the mark. The alpha gamers are paying attention. There just isn't anything left over, apparently.

Kickstarter projects of the small to medium tier variety, have successfully saturated their market. They simply don't need me. If you're planning a new game project today, you should decide if you want it to go Kickstarter or go retail. You are going to need to choose. This is true because I'm not the only one. I'm just the only one willing to talk about it. Why? Because retailers don't communicate and distributors can still milk this cow for a few drops, but it won't benefit the publisher long term. This is likely to change soon, much like the D20 glut slammed the breaks on all things not "core." My guess is the door will close. So I'm mostly just the self appointed messenger.

Is Kickstarter the disruptive technology that will destroy my buggy whip operation? Nobody knows, honestly, but it is far more disruptive than other newer mediums. It's still very new and evolving, and there may be a place for the game trade at the table. As a percentage of the game trade and a percentage of my sales, Kickstarter projects are negligible right now. It is irritating that I have shelves of these games that nobody wants, but it's an irritation as opposed to a serious problem of existential magnitude.

Kickstarter tends to suck the energy out of the experimental fringe, outlier games that we like to carry where we could usually sell a couple now and then, but it has little effect on the mainstream, where the money is at, what most game stores actually sell. But I do see that pie expanding and the problems growing. We all want to get along and have a prosperous, symbiotic relationship, but I don't see how that's going to happen, at least not now. 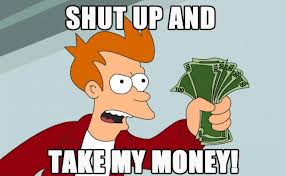