I was being interviewed recently regarding my Kickstarter experience as a retailer. One thing I brought up was the Gartner Group hype cycle model. This is often used to peg the trajectory and maturity of technological trends. 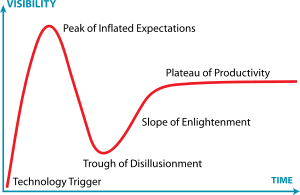 I think most publishers who use Kickstarter are camping out on the Peak of Inflated Expectations. They've got tents, a hot fire going, and they don't plan on coming down. Things are just way too good for them up there with Kickstarter, so they're not leaving the peak.

Myself? I'm in the Trough of Disillusionment, in the realm of disappointment, swearing off this technology as generally not good for anyone. My camp is as soggy and depressing as the melted candy dice I received as my first Kickstarter supported project. The question is whether I'm early or on time venturing into the trough. I'm certainly not alone down here.

The truth will eventually pan out to be somewhere in the middle, past the depressing trough and upward onto the Slope of Enlightenment. At this point, the charlatans, fraudsters, one time publishers who had to get that project out of their system, and dabbling corporations are gone. It's where the professionals and the truly in need of kick starting dial in what it means to properly crowd source a project. The free money period will be at an end.

That leads to the Plateau of Productivity, where we know what does and doesn't work for Kickstarter, where it can and can't sell, and in what mediums it's most appropriate. It will not live up to the Peak of Inflated Expectations and those folks will need to come off the mountain. Some will refuse and they'll stay up there like mad hermits, decrying the death of brick and mortar stores and eating their virtual trail mix and jerky.

Nobody knows what the plateau will look like. In fact, all we know is that it will be somewhat different. Supporter (customer) expectations will change and the customer base itself will likely drop off a bunch of people and add others. Project support (pre-orders) will have clearer expectations. Retailers may or may not be involved. Quality will need to be better established ahead of time. Taxes may be collected as states lose patience with this retail model. Winners and losers will be more apparent. Pies will be made larger. Some people will no longer be getting pie. They will survive. The one sure thing is we won't be talking about it anymore as it settles in for the long haul or the dustbin of technological obscurity or cautionary tales.