I was skeptical when the Tabletop program began, the Wil Wheaton program where celebrities play hobby board games. The skepticism was enhanced when they announced a deal with Target, and when major distributor were running out of these games, while mass market had a steady supply. It seemed like the typical example of the hobby trade doing the heavy lifting so the mass market could skim the cream off the top. The show is also kind of hip, which clearly goes against my Groucho Marx mantra of not being a member of any club that would have me. However, when International Tabletop Day was announced for March 30th, along with a nebulous $500 retailer marketing program, I jumped at the chance.

Why? Tabletop mostly works for my hobby game store as a promotional tool. Our results from Tabletop promotion are uneven, but they're indisputably strong. Tabletop is advancing the hobby, highlighting games that have been overlooked, super charging sales for games that have always been hot, and only in a few cases have failed to light that fire. But sales are minor compared to what's really important.

The holy grail of Tabletop is not to increase sales of these games, which according to my data, are up about 50% after the Tabletop treatment. The goal is to bring new customers into the hobby. We need to grow hobby gaming to survive. Grabbing new gamers is an incredibly difficult task. Our games are clever, relatively complex, and maddeningly difficult to introduce to non gamers.

Tabletop helps us with that. As a retailer, we have a Tabletop kiosk using an iPad, rotating through each program. The kiosk is next to the highlighted games, which tends to result in sales. This is something we learned a couple years ago with the Fantasy Flight Games media center, which allows customers to learn about each game through an iPad interface. Like with Fantasy Flight, these games are good, which is key, they've always just needed a bit more help in promoting them. 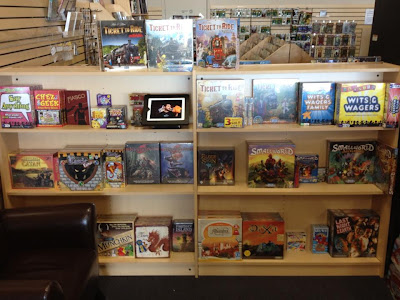 Without too much analysis, here is my raw data. We sell about 1,000 board games titles and this is a tiny subset of what we've sold, so I don't mind allowing the peak behind the curtain for these 20.

The highlighted number in each row is sales in the month that game debuted on Tabletop (sometimes rounded to the next month). The shaded games are ones that went out of stock for long periods of time, making their data pretty useless. There are other games with significant outages as well, but these were the worst. Note that most of these games performed well before Tabletop. The average "turn" rate for the hobby game trade is around 3 a year, so even a potentially slow seller, like the classic Alhambra, is still doing well enough in this chart.

Hopefully you can join us at the store on March 30th. We'll be providing space and volunteers to let you play these games and experience them firsthand. We'll have prizes and other deals going on as well.
Posted by Gary Ray at Friday, March 08, 2013