We're often taught to equate our time with our income, to do a cost benefit analysis of whether, say, washing your car is worth an hour of your time compared to a $10 car wash. If you make more than $10, you might assume it doesn't make sense, where if you make less, well perhaps you should look for a bucket. Never mind that washing your car is good exercise, that work is noble and enriching, and that you'll do a better job of it, just do the math on the back of a napkin and you'll see for yourself.

Money, for most people, is a theoretical concept, and it doesn't require you make a lot of it. You put in the time, you get paid, you spend it, mostly on things you don't want to spend it on, with a sliver, if you're lucky, available for things you do. Most of us don't see how the sausage is made.

As a "knowledge worker," we tended to abstract money with exercises like theoretical budgets (that nobody ever followed with no penalties for going over), cost-benefit analysis, and various hocus pocus involving technology savings. In contrast, as a small business owner, and especially a retailer, I can't afford such economic mysticism, or more accurately, I'm brutally punished financially if I engage in it. Long term savings, like word of mouth advertising, is a bonus that pays off so far into the future that you won't even recognize it when you see it.

Being a game retailer, especially, is to see the granularity of money, seeing how all the pieces come together based on the $3.99 transaction, the most common unit of measurement. In the game trade, these tiny units of measurement fuel a small profit margin business that grosses in the hundreds of thousands of dollars. Even a smaller store deals with sales around $200,000+ a year, mostly fueled by those $3.99 transactions, usually with a tiny margin of around 5-8%. Not only does money become granular, it becomes tightly controlled. This changes your brain chemistry, your thought processes.

As an aside, I want to be clear that this approach to money does not necessarily make you especially politically conservative, although many conservatives would like to assume such things. I still believe in public assistance to get people back on their feet, taxes to keep the roads from crumbling and regulation of things like fertilizer plants. I still believe that government can do good. There's nothing inherently conservative about small business ownership, only a growing distaste for government waste, which is an across the aisle trait. Where I'm often at odds with people, therefore, is not politics, its how they visualize and organize themselves around money.

People who don't use $3.99 units of measurement, who still see economics as an abstract, just don't click with me anymore. We need to talk about something else, or risk sounding like the crazy uncle. They might see the big picture, but they can't see the small one. This includes friends and family, local government, and various vendors and customers. Once you've seen how the sausage is made, you can't un-see that. It doesn't make me cynical as much as it makes me eminently, painfully practical (not necessarily thrifty), and probably hard to live with. That's just one way being a store owner will mess with your head. 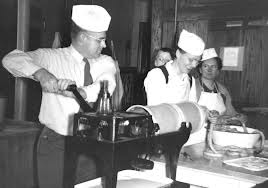