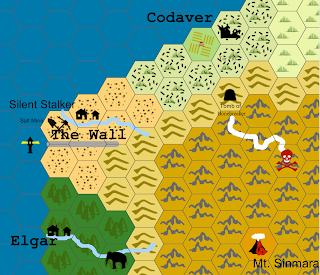 My last update on my Pathfinder sandbox game was a year ago.  We're still playing, with the characters having hit 10th level recently. I'm running a lightly Celtic themed campaign, so we allow reincarnation but no resurrection, so we have a menagerie of races: Catfolk, Vanara, Verrick, and a few others who have come and gone. With so much information on their region prepared, I've got a custom reincarnation table drawn from the various races living locally. Occasionally a resurrected comrade will provide a clue that an undiscovered race may be close by.

The Heroes of Tara, as they're known, take many forms. They are always nearby, you just don't know what they'll look like. You can read some of my campaign blog entries here.

Prep time. Running an on-the-fly sandbox campaign was fairly easy for low level characters, but higher level play has taken more planning. Random encounters can take half an evening of play, so I've become more deliberate in my planning. Although I still avoid long dungeon crawls, the occasional underground foray is a welcome break to plan for the next thing.

Higher level play also means more complex challenges, including more varieties of creatures, such as flying encounters, incorporeal encounters, and lots of oddball constructs and undead. Thinking in only a couple dimensions can be a serious handicap for the monsters. Of course, all of these creatures now have entries that are a couple pages long. I'll admit I've skipped an encounter or two, just because it sounded exhausting late into a session.

Having created regions of certain level ranges, high level PCs roaming around can be hit or miss. On the coasts, they dominate. Deeper into the mountains, they still need to watch themselves. I often scale existing content up (rarely down) to keep the game interesting. They say they would prefer some easier encounters, but when they get them, they feel disappointed.

Mapping has gone digital, with the campaign map created in Hexographer and the hex paper map abandoned. I keep two copies, a master that I refer to and the player copy that I edit and post to our Facebook page. One challenge was keeping the PCs from just flying over everything without exploring it. That was solved with some very powerful flying creatures that had a taste for wizard flesh. Our latest was Old Ragna, a fiendish, advanced, giant, Roc, the size of a house.

Story arc. The party has explored an area the size of Sonoma County on their island the size of California. Still, they've uncovered a massive, worldwide conspiracy, and have been attacked and nearly slain by their demigod (Tuatha) protagonist, saved only through divine intervention when the goddess, The Morrigan, took umbrage when fate was nearly subverted. Now the party is beginning a quest for The Rod of Arges, a kind of Rod of Seven Parts race to gather and put together an artifact before their enemy.

The quest will lead them into the ruins of the ancient cyclops civilizations, along with war remnants where their ancestors fought The Old Ones, the Cthulhu inspired bad guys that humans unlocked in their petty wars for power. The theme of humans needing to be held in check because of past deeds is a major story element.

Mythic. Finally, we've started this great quest using the new Mythic Adventures rules. They're first tier after our last session, the moment in time when history will remember their acquisition of an item to find the first part of the rod. Mythic is not only fitting for this group of renowned heroes, but it should make higher level play more interesting. I personally find high level Pathfinder play slow and dull, so anything to jazz it up will keep me happy, and the campaign alive. 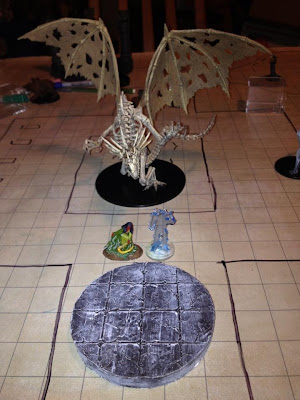