Looking down from the desert ridge, we saw several four by fours and half a dozen men making camp. There were four of us crouching on the ridge, armed with rifles and shotguns, dressed in camouflage, whispering to each other about what we were seeing. We weren't in the military, we were camping.

This always happens when Jim comes with us without his girlfriend Linda. Things spiral out of control, with no common sense. Don't get me wrong. Linda is no slouch, either with a shotgun or in the outdoors. As a woman, she just brought a different perspective to the situation, one that young guys didn't possess and one that successfully countered her impulsive boyfriend.

From a store owner perspective, I try to avoid finding myself on the metaphorical ridge line with my rifle. It's one reason why I welcome women onto our staff, as well as anyone who has a perspective different than my own. It's not about women as caretaker or mommy figure, it's about suggesting different approaches, seeing things in different dimensions, along with having values of order and cleanliness that often seem to be lacking in most men. Some of this is perhaps my shortcoming as a manager, but that's why I have great staff, to bolster my weak areas.

Appealing to different people, as a store, also means those people are more likely to, you know, buy things from you. In the case of women, it's true that women often control household spending; about two thirds. So even if a 30 year old woman has no interest in Pokemon (some do), little Sally isn't going into that snake pit of a game store when the same product is sold at Target.

Having more women playing in our game center also avoids The Ridgeline Effect. Once the wooing of the women subsides, the guys eventually fall into a normal rhythm, one not fueled entirely by testosterone and energy drinks. This creates an enjoyable environment for everyone and creates a more welcoming and open experience. This is where I put an equals sign, followed by "profit!"

As for games themselves, they are traditionally about fighting, racing or building. It has been this way for thousands of years. Racing games are few and out of fashion, so that leaves fighting and building, with fighting generally a turn off to most, but not all, of our female customers. Building, however, is all about board games, and Euro games have about a 50/50 mix of men and women playing them. So we at least put the board games in the front of the store to not scare off half the population.

I've had women get angry with us for the war games. I recall one pointing out all the war: Warhammer, Warmachine, Flames of War. It doesn't help to counter with a thousand options for building and racing. Some people are just going to find their hot button. A couple decades ago, war would have been fine and we would have been accused of demon worship in the RPG section.

I suppose that brings us to the big question of why there aren't more girl games. I'll answer it with the very common occurrence of "Honey, this is a store for your brothers." Culturally, we steer girls away from games. At least that's what I see, often from mothers. Occasionally, I'll intervene or come to her defense and get a young girl started with Carcassonne or Ticket to Ride, but it's a long shot if mom isn't on board.

Thankfully, the combination of women on staff and how it effects the store, from layout to cleanliness to welcoming of female customers in the front and back, has made slow inroads in this area. 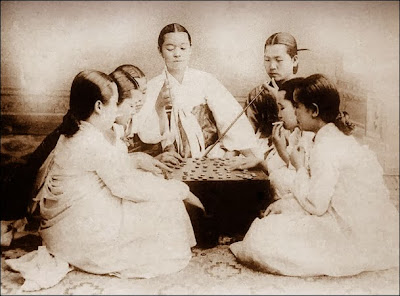