Around a third of all hobby game sales are of one product line. This game has releases quarterly, and as it fluctuates in popularity, businesses ebb and flow, including game distributors and every hobby game store. Stores choose their POS systems based on how well it handles this one product. Business plans, if they exist, focus on how to feature and support this one product.

It's such a popular product, that it's saved, hoarded, and tracked like currency over decades. It's the original Bitcoin. It's not inconceivable to forgo the stock market in favor of collecting this product. Thieves regularly break into game stores to steal it. It's published in ten different languages and we carry product for seven of them. Other than a couple games in Spanish, there's nothing else like it in our store. I'm referring to Magic the Gathering, of course. Today is the release date of Khans of Tarkir, the hottest set in at least a couple years for the hottest game in the world.

I previously discussed the Magic pre-release. It's a product of limited supply, with a huge demand, tied to an event that can only happen on two days ever, at a location with limited seating. It's a unicorn of sorts, with incredibly tight sales parameters that inevitably leads to profitability in a trade joked about for its lack of profitability. Magic the Gathering booster boxes are the exact opposite of this.

Booster boxes are often called commodity items, as in ubiquitous items of nearly unlimited supply. However, booster boxes fail the fungibility test, as in only Wizards of the Coast produces them. So they're not quite a commodity item, but they are widely available, nearly limitless in supply, and in high enough demand that the price of one is rarely the MSRP.

If you're a casual Magic player, you may not be aware that Magic boosters come from booster boxes. There are 36 packs in each box and there is nothing especially magical about the price of a booster box. A booster box doesn't really have an MSRP from Wizards of the Coast, they just sell us packs that happen to come in boxes.
Every other product in the store is sold at roughly MSRP. So you would expect a Magic box to be 36 packs times the cost per pack. Since packs have an MSRP of $3.99 that should result in a Magic box price of $143.64. So is that the price? With a nearly unlimited supply and an enormous demand of this near commodity item, nope.

Khans of Tarkir, the hottest set in years, on the release day, right now, with a box cost of $73.08 ($2.03 a pack x 36) can be bought online for as little as $100 plus free shipping. Ignoring shipping, that's a roughly 37% margin for this industry driving, super hot product. With Priority Mail shipping, it's more like a 20% margin for that retailer or a $15 gross profit on a box that "should" sell for $145.
We know why the box is sold at such a low price, because of the market forces. But what is a retailer to do? How does a retailer know how to price this value price eroded product that makes up such a frightening portion of their sales?

First, lets get something straight. If you're not a box "flipper," as in a low box cost, high volume seller of Magic boxes, the vast majority of your pack sales are to casual players. Casual players are the backbone of this product. They allow you to have margins high enough so you can give deep discounts to the serious box buyers. If you're a casual Magic player, know that you're supporting this model. I've always felt bad for you guys. Without you, there would not be the profit that drives the game trade, as a 20% margin doesn't take you very far in a trade that agrees it needs 50% to prosper.

I should also mention the casual player is a very different market than the serious player. They find the concept of a $100 booster box just as obscene and inconceivable as a $145 box. They will not be buying boxes, possibly ever, and what you sell your box for is of no concern to them. These two customer bases are entirely different. Nobody has ever said, "Wait a minute, you're ripping me off by not giving me volume pricing on my booster pack purchase!"

Here's where I would like to be able to show you a chart (below) that demonstrated selling boxes at a higher price is far more beneficial than a lower price, but that's not realistic. The market price is the price. That incredible demand with unlimited supply sets the price and you just need to slot yourself into that equation to maximize your profit. There is no perfect information in the marketplace, no right price for everyone, just a right price for you to sell the most number of boxes at the best price possible.

That number is something you need to experiment with. The first few years of having a store, I sold Magic boxes at $145. Hold that line! When I say I sold them at $145, I really mean I sold one box, two if I was lucky, from each release. I wasn't really participating in the market. I had the wrong price. Since then, I've experimented with $125, $115, and low pre-order prices in the $100 range. By doing this, you start to see your supply and demand curve. 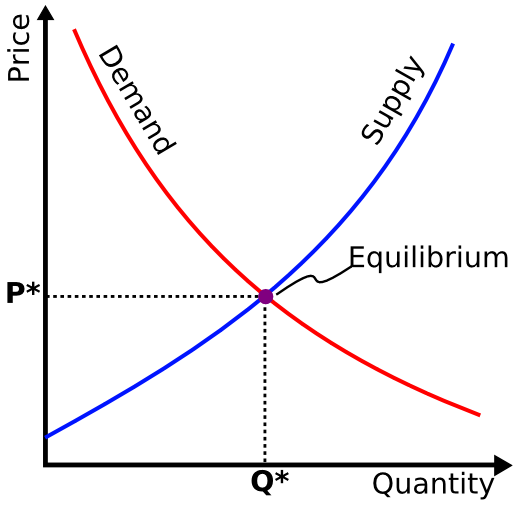 What you're looking for is that equilibrium point, where the price perfectly matches the supply and demand. That price is going to move as well and I suggest you freely adjust your box prices up and down as the supply and demand waxes and wanes. If a set is out of print or in short supply, move it up. If you're sitting on a ton of crappy product (Born of the Gods), mark it down. There's no fear of eroding brand value because the brand is already at near commodity levels. The brand has no absolute value.

If you're a retailer, contact Lincoln Erickson, who gave a presentation on exactly this two years ago at the Gama Trade Show. He experimented with box prices, created supply and demand curves and came up with a price that was right for him. Our price happens to be around $115. That's where I sell the most amount of boxes for the most amount of money. It's a price determined by the local market, the worldwide market and lots of trial and error. At $125, sales drop off. At $100, they don't increase appreciably and I'm giving away money.
Posted by Gary Ray at Friday, September 26, 2014