I posted a graph of our D&D and Pathfinder sales yesterday publicly on Facebook that got a lot of excellent comments. I'll post the slightly extended graph with more back end months along with my initial comments: 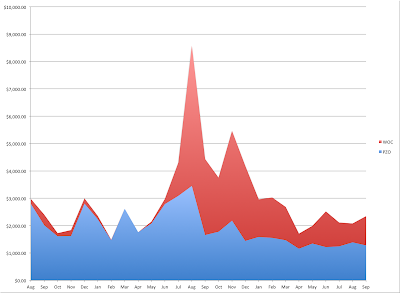 My question with D&D 5 was whether it was going to "grow the pie." I wasn't aware at the time that Wizards of the Coast planned to stop making pie. WOTC would be the pie maker for the weight conscious RPG consumer. When that became apparent, I had numerous confectionary predictions of upcoming pie problems. Piepocalypse, if you will. Bottom line for me: It has not grown the pie. There is still pie. Pie opportunities missed for sure. Piepocalypse averted.

So what does this chart mean? It's data showing D&D and Pathfinder sales over a period of time for just my store. It's a tiny slice of the industry. Heck, it's probably around 2-3% of my store sales, so it's a tiny slice of that. As such a tiny slice, it's more thought experiment than groundbreaking data. Still sounds like I'm talking about pie.

You could speculate. I see a decline in Pathfinder sales, but there are reasons for that besides loss of market share. Pathfinder 1.0, as I'll call it, has been around a long time, and although nobody talks about product life cycles, if it were Dungeons & Dragons we would be looking for a new edition. There is no talk of a new edition, in case you were wondering.

Also note that although Pathfinder sales are stronger than D&D sales for us, Pathfinder does it with 279 products on the shelf, while D&D does it with nine. I could shake my fist at Wizards of the Coast for not making more D&D product, but LOOK AT THAT EFFICIENCY! It's the fan boy in me that wants more products. The retailer looks at this and wonders why I need 279 Pathfinder products to achieve similar results. It's about 20 times more efficient over the last six months. But this is bistro math. Meaningless.

You could predict a steep drop in D&D sales as well. They're not producing new core books, things people buy, but instead they're outsourcing licensed adventure books, things people generally don't buy, at least not in strong numbers. Yet, we're a year into this D&D austerity experiment and we still sell about $1000 a month of the nine products we've got. That's not bad. It's not as good as it could be, I would argue, but it's not 4E bad. I think it could be better with more products. How many is the question.