Don't You Wish Your Girlfriend Was Hot Like Me? (Don't You?) 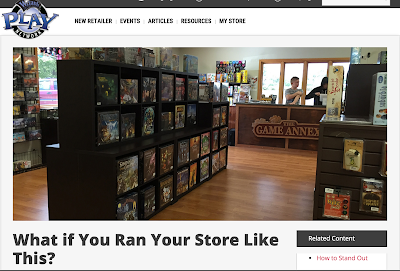 The independent game store has no better friend than Wizards of the Coast. They communicate well. They take our needs into consideration. They value us as partners and work with us authentically in that capacity. There is one thing they do that bugs me though. If I were the kind of person to be easily insulted, their series of articles telling me how I could run my game store better would definitely rub me the wrong way.

First, Wizards of the Coast is the 500 pound gorilla. Having your much larger partner start telling you how to run your business feels a bit, well, like bullying. Hasbro, of which WOTC is a division, is a $4.2 billion dollar company. Most game stores are small, as in the $200K a year model (although some will tell you the average is even less). Having a behemoth tell you how to run your little business feels a bit overbearing, even if it comes from a place of trying to help, which I believe it does. 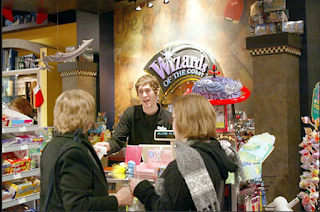 Second, Wizards of the Coast is not who you want giving you advice on how to run game stores. As you may recall, Wizards of the Coast massively failed at running game stores. They closed all 80 of their stores in 2003, many of which were known for extravagances that demonstrated they had no idea how difficult it was to run such an enterprise, let alone 80 of them. They also took down The Game Keeper, which they acquired, ending what was the only national chain of game stores, with over 100 locations. The game trade hasn't seen a national chain since and probably won't.

Third, and this is a big one, the state of game stores in this country is entirely an expression of Wizards of the Coasts policies in the marketplace. The vast majority of game stores exist because of the success of Magic: The Gathering. The absence of this one game would crater the game trade. If the game trade were the banking system, Wizards of the Coast would be too big to fail.

If Wizards of the Coast would like to see game stores up their game, there are several policy changes they could make that would not only improve the lot of game stores, but up their brand. Here's where I smugly suggest how they could improve their business. These policies are:

Fix Game Store Margins. Wizards of the Coast recently reduced the margin game stores receive on Magic: The Gathering, rather than raising the price. They reasoned that the consumer could not stomach $4.99 Magic booster packs, despite inflation, but retailers could eat a margin decrease without any trouble. That move cost my store $2,000 a year. That $2,000 could go towards new carpet, better fixtures, and more inventory to better serve my customers. Raise the price of boosters to $4.99 and return the margin to 50%. I'll up my game.

Implement MAP Pricing Policy. Specify a Minimum Advertised Price policy that dictates how low Magic products can be sold for. Online and brick and mortar stores regularly undercut the market by selling boxes of Magic for a few dollars over cost. This has greatly devalued the game, forcing game stores to sell Magic for well below what it's worth. Some Magic centric game stores subsist on a 25% or less gross profit margin, barely getting by while stinking up the market place and ghettoizing a good number of metro areas around the country. Do you think those stores have clean bathrooms and nice fixtures? Hell no, they can't afford it. Take this market defining product and restore its value in the marketplace.

While we're at it, put a limit on case purchases by retailers. There's too much incentive to flip cases for a few bucks over cost, perpetuating the devaluation. Tie case sales to organized play participation. WizKids just did this with Heroclix and it put a floor on their incredibly devalued product and reinvigorated the game in a number of game stores. Adjust supply, put a floor on minimum advertised price, and you'll see game stores make more money and up their game (if not, the ones that do will run them out of town, also a good thing).

Enforce Street Dates. Start penalizing big box stores and their suppliers for selling product early and undermining independent stores. Cut off a Target if you have to. Penalize a Wal Mart. It's such a regular occurrence, there's a series of Facebook threads with photos every ... single ... release. Also, beat down the independents who break the rules and cut off the ones who do so repeatedly. You know who they are. Why do you allow this to continue?

So there you have it, coming from a failed publisher of role playing games (our expensive to produce Pathfinder adventure netted us tens of dollars) to a failed game store chain owner. Again, I'm sure they're just trying to be helpful, but it's awfully condescending.
Posted by Gary Ray at Friday, November 27, 2015