I'm not a violent person.

If shoplifters knew how close I was to bashing them with a bat, rolling them in a carpet and burying them in the desert, they might think twice. I would never do that. I'm almost certain of this. Like 99% certain. Maybe 98%. Well, the situation could escalate out of my control, lets just say that. If you ever do it and I'm on your jury, I don't think I could convict.

How can I possibly joke about killing another human being, who by definition, committed a petty crime? It's the little things in life. If you talk to a loss prevention specialist, they'll tell you that 10% of your customers and employees will always try to steal from you, even with cameras, security gates and guys with guns. They like the challenge. They'll do it until caught, and then apologize, and if you let them, do it some more. 10% would never steal from you. Don't pretend you know who they are. 80% of your customers and employees will steal if given the opportunity. This is where you put all your effort, attempting to dissuade the vast majority of people not to rip you off.

So imagine you work in a field in which 90% of your co-workers and customers will steal from you, if given the chance. They'll take food from the mouths of your children and shrug when you chain up your front door. Business is hard and full of unexpected challenges, they'll say. Imagine watching it happen again and again, proving the ratios more or less true.

Imagine not knowing if a friend at work is in the 10% never or the 90% maybe, or perhaps they're stealing from you right now. Imagine finding out the dark truth, again and again. Betrayal as a matter of course. More than one retailer has talked to me about losing their soul over this. Losing your soul, crushing your spirit, leads to burying bodies in the desert. It at least leads to contemplating it. Also, nobody will understand this, except other retailers. Not your wife, your kids other non-retailer business owners. There's just that fraternity of bat wielding retailers who understand.

There is no justice here, by the way. The police are not interested in your petty crimes. We had a shoplifter on site and the cop showed up (an hour later) and asked me what I wanted to do about it. By the way, he said, nobody is going to jail. In other words, he would mediate a solution that did not involve him using his law enforcement capacity. When society decides victimization is the cost of doing business, well, you buy a shovel.

Don't take this personally, people will tell you. It's the cost of doing business. I don't agree. Those are just some words people say to keep you out of the hardware store. With more of retail going towards big, corporate owned stores, many people believe it's just the cost of doing business. Thieves like to think that. It's why people don't take shoplifting seriously. They'll joke with me about the stuff they stole as kids, as if I would find that amusing. It's sticking it to the man. Yeah, Wal Mart and Target have 3% profit margins, but those CEOs! They make millions! Stick it to the man. It's the cost of doing business. Then they'll post their outrage to Facebook when the line employees of those stores get laid off.

I'm really not a violent person, but the threat of violence is a necessity to running an independent store. Professional thieves have visited and asked about our affiliation, whether we're part of a larger chain of stores. Why? Larger chains of stores have clear policies regarding bashing shoplifters with bats, rolling them in carpets and dumping them in the desert. I've had them ask that question while they were actively shoplifting. Is my stealing from you the cost of doing business or will I end up in a shallow grave? It's important they know the bat is on the table. Or the counter, if you will.

But this is all just talk. I'm not a violent person. 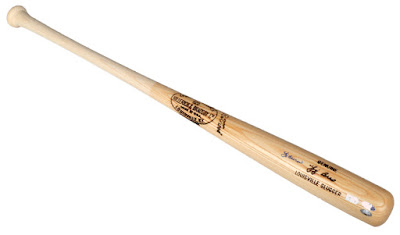