Well, I didn't buy the store, I bought its contents.

Not all of its contents, just its games.

Well, not all of its games, just the ones I hand picked. Plus the drink cooler.

If you're going to buy a store, buying the inventory is your best bet. You don't want the actual business, most of the time. Buying a business is like getting married, but very quickly and without knowing if they have good credit, and agreeing to take care of all of their problems and debts. It's like getting married to your down on their luck, second cousin, in outer Uzgameistan, with an implied shotgun pointed at you from your uncle-father-in-law.

No, you just want the stuff. In the old days, you would pay maybe ten cents on the dollar for sight unseen game nonsense. If you can curate that experience, you might spend twenty cents. We do twenty cents on our ding & dent stuff all day long (if any game companies are listening). This is almost always cash up front, an offer they can't refuse.

Offer less than twenty cents and the previous owner is likely to do what most failed game store owners do nowadays, go home and sulk with their Ebay account and get thirty or so cents on the dollar over a long time. With the devalued game trade, you can get forty cents (close to wholesale) all day long on just about everything, so nobody is going to give you close to that in a sale.

This particular store was one I helped set up. So although I had never been there, I spent hours with the previous owner hand picking the inventory, including a walk through the dealer room at the GAMA Trade Show.

Of course, the owners went off script and bought a lot of garbage too, but I was able to ignore that stuff. In one day, we ended up increasing our store inventory by 12% without adding any new items to our system. With everything recommended by me and hand picking the mostly good stuff, I essentially bought safety stock.

Where the deal is weird is how we structured the money. The owner being a good friend, we didn't do that ten or twenty cents on the dollar thing. We did more like thirty five cents at the end of the day, with payments over time. The reasoning here, which I don't recommend, was I could leverage inventory turns to make more money than the loan payments. We're basically using inventory analysis, something you do on the back end, for sales projection. This is a dumb thing I don't recommend. It's like buying stocks based entirely on past performance.

It brought up a bunch of difficult thought questions. If everything is safety stock, are you really selling these items or selling the previously purchased ones? And what about the overall increase in sales you get by having 12% more inventory? How do you calculate that? It doesn't happen right away, because of the nature of safety stock. That occurs on a curve as the safety stock sells and new items are ordered to replace it. This assumes you order more stock and not pocket the money (you will be ordering less and building a cash reserve).

This is why twenty cents on the dollar sounds swell. But I'm helping out a friend. That's the take away. And so many new beverages on the way! 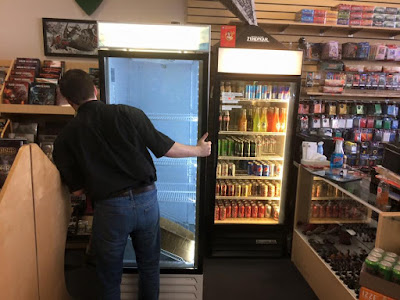