They didn't want movies and first person shooters, because although they might have have been muggles before, WoW changed them forever. They discovered (or sometimes re-discovered) Magic: The Gathering, and as WoW spun down, Magic took off, doubling in revenue in just a few years time and continuing to grow. This is a narrative I weave with no justification in objective fact. It's observational and greatly simplified.

Magic continues to grow, and I would suggest, to a frothy level. Retailers talk incessantly about card values and online sales methods. Margins on singles sold online have shrunk down to the level of a commoditized product. Magic judges are insisting they get paid, like employees. Small stores are subsisting entirely on their singles market, shoe boxes of sleeved cards worth tens of thousands of dollars.

Are we at the stage of "irrational exuberance?" When will the Gaming Goat's tax dodge description of "It's just cardboard, it has no monetary value" come around? Is Magic big enough that a collapse will mean a spin down rather than a sharp crash? Will there be a "return to the mean" or total destruction? Are we looking at the housing market or Beanie Babies? When will the blow off start? Is there a thing that will attract that jettisoned WoW player once again? Some say it will come in the form of virtual reality.

The chart below was designed by economist Dr. Jean-Paul Rodrigue to describe investment bubbles. All the talk I hear from store owners seems an awful lot like "New Paradigm" discussions. 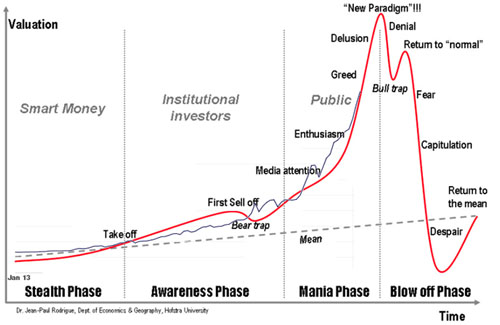