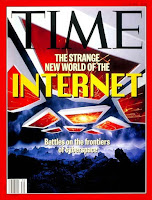 Back in my day... we bought booster packs or a starter deck. There was one deck, and you didn't need another one once you had your one. You had started. We had no idea what a booster "box" contained, how many packs or what it cost. Heck, boosters could have came in bags for all we knew. Booster bags.

There was also no World Wide Web, no Ebay and no "net decking" to tell you what to build. There were no well known Magic tournaments either. You played with your friends around a kitchen table, although tables were beginning to show up in game stores too. We lived in caves, subsisting on melted snow, dreaming of a time when we could spend hours a day arguing about nothing on the Internet (in a more pleasing graphic rich format). My lawn was just starting to bloom, so no need to ask folks to get off it. The year was 1994.

I mention this because I sell a ridiculous amount of Magic: The Gathering at my store and I had no idea how I was selling it until I recently ran the numbers. Sure, we sell singles. Even back in my day we would buy some out of the case. I was especially fond of French versions and I recall building a really cool French vampire deck so I could beat up my friends. We had been playing games like Dungeons & Dragons for years, but as young adults, we didn't have the huge blocks of time to devote to that game any longer. Magic filled that gap and kept us together as a group.

At the store, we've only recently started getting more serious about singles, even selling them online , but I never expected them to be our best seller. My number one selling product in the store is used cards. I'm still trying to wrap my head around that.

Magic boxes are close behind, and if you ignore the few points of online sales of singles, boxes are the actual best seller. Our store strategy has always been to appeal to casual players. But what does it say when singles and box sales outstrip packs and casual products? I'm not sure if it means we've lost our casualness or if casual players are now more inclined to dip into the singles collection or gamble on boxes. 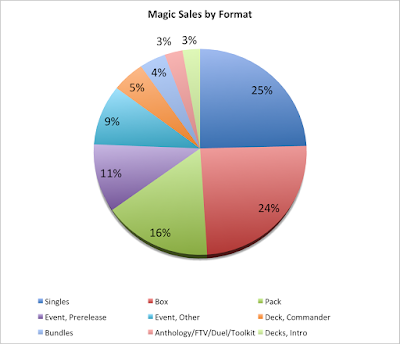 Many, if not most game stores focus on single sales. I reluctantly followed suit, getting nervous every time my staff made a big buy. Then I ran the numbers. A solid turn rate, how many times a year I sell through inventory, is perhaps 4-5 for things like board games and RPGs. I ran the numbers for our singles collection. Then I ran the numbers again. That can't be right. 50. 50 turns a year. That's like taking our entire Magic singles library, and selling them to a dude (or dudette) nearly once a week. In reality there are cards that fly through our collection, selling as soon as they're received, while other cards have never sold at all. Our recent foray into online sales saw those leave us, with a nice sales bump.  But 50 turns... It's why we have backpack dealers and stores buying point of sale machines that handle Magic singles first and everything else second.

If I sound kind of ignorant as a store owner, that's because I've resisted the pull of Magic and especially singles. We are strongly diversified, enough so that Magic could fall off the planet and we would still be here (the game trade might implode though). The mercenary nature of a lot of players has made me reluctant to engage 100% with this subculture, and that's what it is, a full fledged subculture. It's an independent subculture where judges report to the mother ship, not me, and players see Magic product as a commodity, available instantly from the lowest bidder. It's a pretty sandy foundation on which to build a business.

Magic singles are the Bitcoin of the game trade. My landlord will take neither in payment for the rent, yet I'm supposed to believe a surplus of either makes me wealthy. As of a few years ago, I've handed Magic over to my expert employees to manage, following the money rather than my 1994 concept of how things should be. I've been happy with the results as they've doubled our Magic sales from just a few years ago. It's nothing like Magic-centric stores, but it's a wonder to watch.

I've also been happy to see the Magic community come together and support the store. Our expansion project, at least the money to get it started, was done with Magic money. When it was finally built, I approached the community with arms open. This is yours. You built this. As many events as you can maintain, we'll run those events. And they've managed it four nights a week. It has come a long way from those days around the kitchen table with my friends.