Pathfinder: The Jeep of RPGs

Paizo just announced their playtest for version 2.0 of Pathfinder, their role playing game. As a retailer, I can say it's about time. I was against it before I was for it, but eventually I became a big Pathfinder supporter after not only becoming disenchanted with D&D 4 as a player, but I also realized the Pathfinder release cycle was going to blow D&D out of the water.

As a retailer, the Pathfinder formula was undeniably good, provided you could overcome the drag of Paizo direct to consumer subscriptions and the deep discounting all RPGs face online (many couldn't and there's animosity there). Paizo even sponsored me to teach other retailers how to stock Pathfinder. So I like Pathfinder and I'm glad we're finally getting a long awaited 2.0, and I will support the playtest at a deep level. But why is it like the Jeep?

I'm a Jeep fan, and Jeep fans have the same authenticity issues as Pathfinder fans. Pathfinder is essentially a 17 year old role playing game that's been updated a few times. At its core is the D20 system, which went through a 3.0, a 3.5, Pathfinder 1.0 and now Pathfinder 2.0 (it lives on in D&D 5, but that's another story). Fans love their D20 and are loathe to jump ship. If they haven't at this point, they've found their True System. Jeep also goes through versions, with die hard fans as well. Jeep fans are a bit nuts, with their slogan "It's a Jeep thing, you wouldn't understand" as their excuse for the completely irrational decision to own such an impractical, unsafe, uneconomical, and uncomfortable vehicle. But the heart wants what it wants.

With Jeep safety and economy improvements, fans lament the brand has lost its soul and authenticity, often despite it's ever improving off road prowess. Slant the windshield slightly or use aluminum where there was once steel and the sky will surely be falling with callbacks to the previous versions as the Last True Jeep. For Pathfinder, a new edition promises to be faster and more efficient, and of course, there are already those complaining about changes to the new edition. The similarities in fan bases is uncanny.

Of course, the reason why Jeep builds a new model are similar to why Paizo needs a Pathfinder 2.0. Everyone already has the old product. No matter how much you love it, use it every day, and swear you'll never change, a company can't continue making a product after ten years and hope to survive.  Paizo is in year 10 of Pathfinder 1.0 and likewise, Jeep is just now phasing out their JK Wrangler model introduced in 2007. Both were wildly successful, despite naysayers, and their new versions should remain so. Of course Paizo doesn't have government safety and economy standards to deal with, but they do have competitive forces that require they develop a faster, more streamlined system with modern design sensibilities (you know, like D&D 5).

So there you have it, an odd comparison nobody asked for, but one that's on my mind. You can expect a Pathfinder 2.0 to be very much like the new Jeep Wrangler JL. It should be evolutionary, not revolutionary. It should change where it needs to and not where it doesn't. It should be true to the spirit of the original, D20 to its core, and better where it can be. If you want a revolution, the door is on your right. It's a Pathfinder thing, you wouldn't understand. 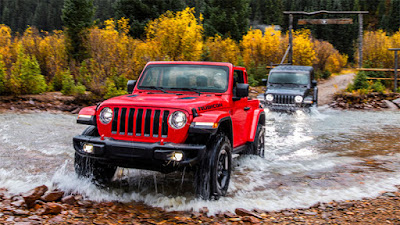