"Russians don't take a dump without a plan. And senior captains don't start something this dangerous without having thought the matter through."

Policies and procedures are the heart of my business. It's what keeps it going the 85 hours a week the store is open, while I'm only there 24. We have policies and procedures about everything, which results in safety, quality (consistency of experience), and a focus on our Unique Value Proposition. So when a new law went into effect in California in January, forbidding me to have a policy, I raised an eyebrow. We have policies forbidding employees from wearing shorts, but I can't have a policy about hiring dangerous felons. 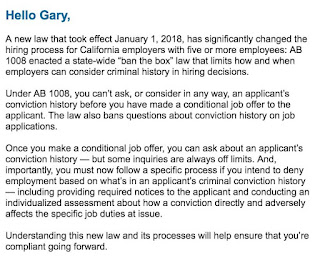 This came about because of our flawed criminal justice system and the fact those who have paid their debt to society were being screened out of jobs. With increased transparency in all aspects of life, we now know our criminal justice system is rather flawed, racist, classist and generally a brutal regime. I used to want to be part of it (dodged a bullet). With the unemployment rate at around 4%, non college grads are often screened from getting a job, so you can imagine what happens with applications where the "Have You Been Convicted of a Felony" box has been checked. This is a justified attempt to fix the bias against those who have paid their debt to society. However, not surprising with the government, the implementation is flawed.

While I support reintegrating ex felons back into society, how we went about doing it in California was a bit ham fisted. Here's how it now works when I try to hire a new employee:


The result of this policy is hiring managers are now making life or death, subjective decisions on existential matters. Of course, this is not satisfactory to any business, so although you can't have a policy on what criminal convictions aren't acceptable in your organization, more than likely businesses will have a policy that the hiring train screeches to a halt when a conviction pops up.

Every flagged candidate will have to be vetted by someone in the business authorized to make subjective decisions on existential matters, most likely officers of the corporation or at least senior directors. These are people who can stand behind a decision that could result in either a very thorny legal liability or the possibility of great harm coming to employees or customers. This decision must come within a very narrow window of time.

Should we hire this murderer? You've got five days to consult with a VP, an attorney, draft a letter and get everything squared away so your dishwasher or retail clerk can be hired, not hired or if you're late, bring a lawsuit. Or maybe just don't hire right now if the attorney is not in the budget. Or maybe hire in another state, if you've got multiple branches. I know this is hard for anyone not running a business to understand, but the risk of this being handled poorly is great physical harm or a lawsuit that could drive a company out of business.

As the quote says, "senior captains don't start something this dangerous without having thought the matter through." One does not simply hire someone in California without the entire organization prepared for battle. Whether you're a mega corporation or a corner store with five employees, you better be ready for battle with every new hire. So no shorts allowed, but murderers? Let's hear what they have to say.

Finally, this is another example of a law that small organizations will likely ignore, big companies will absorb as the cost of business in California, but medium sized companies will have difficulty with the implementation. Don't get stuck in the middle.
Posted by Gary Ray at Saturday, March 17, 2018