Mexican Coke and You (Tradecraft)

The joke is I don't need to sell a lot of games because I'll make it up in snacks. But what if that was true?

Mexican Coke is often cited as the big seller, and we sell a lot of it, over 775 bottles in the last year. 58,000 calories or enough to power a human for a month, albeit with severe diabetes and malnourishment. That might sound like a lot of Mexican Coke, but concessions are only 3% of my sales. However, for some stores, that percentage is a LOT higher.

That's because concessions are sold during events, and event space has a narrow range based on event sizes, which is constrained by the hard costs of real estate. My estimate is between 50 and 100 seats for events is a normal range in the industry, 50 being the Magic number where you hit the WOTC top tier. If you haven't built for 50, you researched poorly. This means concession sales have a limitation regardless of how many other things sell in the front of the store.

A million dollar a year store is likely to sell roughly the same amount of Mexican Coke as a two hundred thousand dollar a year store. The percentage of sales for those concessions will obviously be much higher for the smaller store. Concessions is no joke, and in fact, serious business, when it's a huge part of your business.

This is likely to be perceived by customers. If you shop at a small store, and most stores are small, you rightly perceive your Mexican Coke purchase is significant. When Internet trolls give supposedly bad game store advice about concessions, their observations may not be wrong. 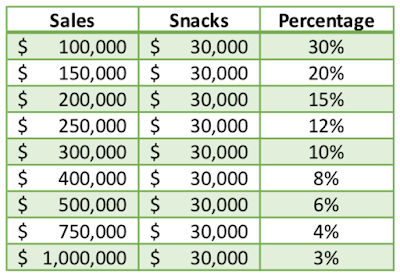 This might also be the cause of friction between those focused on events and those of us, like me, who see it as a marketing expense. Events are necessary for me, critical for my success, but I don't actually sell significant amounts of stuff at events. It's what I often refer to as "the tail wagging the dog," when event policy begins to dictate store policy, the marketing department telling the CEO what's up. When stores become afraid of offending event participants as an existential issue.

Well, if Mexican Coke pays the rent, it IS an existential issue. If events are the store, and concessions are more like 15% of your sales rather than 3%, then I can certainly see why that's critically important to you. So much of this trade seems to be about event management versus selling stuff, and this might be because of the scale of most of the stores. So bottom line is the joke is on us. Maybe selling snacks to keep the lights on is a more viable strategy than we first thought.
Posted by Gary Ray at Friday, April 27, 2018