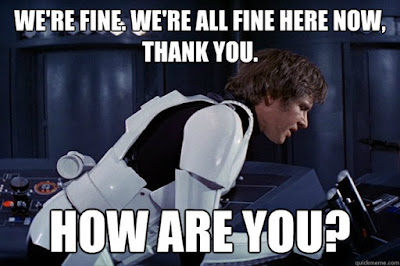 This is my fourth report to stakeholders of Black Diamond Games, Ltd. We're a private company with a lot of transparency. I'm going to forgo the formality this year and write informally about our year in general. Every store owner has a specific narrative about what happened to them, with generalities about what is happening in the trade.

A lot of stores have recently announced they're going out of business. More than average? Who knows, we have no data. I also have store owner friends with 20-40% sales increases in 2018. Your mileage may vary and your narrative is mostly your own. I think the trade is booming, but it impacts everyone differently. The rising tide lifts some boats. I also think that tide seems to be crushing it online right now, while the water trickles into the brick and mortar harbors. There really is no way to contain general enthusiasm to build up a head of steam in the Internet age. It's all on the store owner to locally build up enthusiasm. Retail is like a tea kettle and when a head of steam builds up, the release is the Internet. If you hear that whistle, it's money being added to Jeff Bezo's bank account.

I think it is increasingly difficult to funnel the bonkers enthusiasm to the friendly local game store. Parallel systems now exist to do what we do. You can buy your D&D books on Amazon at below wholesale prices and the important service of learning how to play those games can be accomplished by watching high production D&D in play videos online for free. This is an example of our Unique Value Proposition, game space, becoming a mere Useful Value Proposition. It's also an example of poor brand value protection by Wizards of the Coast.

These videos are becoming the normative way to play, and players are holding their local DMs to these professional standards. That's not how it's done on Critical Role they say, so it must be wrong. A good number of YouTube D&D channels now have over a quarter million subscribers, the tip of the cultural iceberg. Personally I can't sit through a recorded D&D session without growing instantly bored, I just don't get it. However, I find Matthew Colville's D&D channel addictive and brilliant.

The question of what would happen to your store if millions of people suddenly played D&D? For us it meant an 18% increase in RPG and dice sales and a 200% increase in miniature sales (because WizKids is awesome). I don't want to sound ungrateful, but I was expecting more from the revolution. Whenever I talk about the tea kettle whistle and how we're mostly left out of this building head of steam, a store owner will tell me they sell a metric buttload of D&D books. Yes, that's not the point. Or ... maybe it is.

Something was off for us in 2018. In retrospect, 2017 was a year too good to replicate, although we pretty much did. In 2017, Warhammer 40K was booming, board games were on fire, Magic staggered around like the giant Pillsbury Dough Boy of Ghostbusters, scaring everyone as it lurched about (while making money), ready to destroy buildings (stores). Our 2017 sales, with construction of our Game Center complete, jumped 14%. 2018 was a shadow of 2017 as it struggled to replicate that success.

2018 saw Warhammer 40K cool a bit as the new edition matured and customers tired of the weekly release schedule (down 20%). The board game bubble deflated a bit and it took months to figure out I was over ordering like we were still booming, right about the time the big hits arrived, and I was too gun shy to go deep (down 7%). I was ready to throw my hands up with board games. It was an enigma in 2018.

Magic staggered around as usual, with a tight embrace of the mass market, finishing up with a volatile December release that took everyone by surprise (down 1%). As I write this I have one box of Ultimate Masters left, and the difference between having it and not having it would have been the difference between losing money in 2018 and making money. You could say that about a lot of things, but since I practically wished Ultimate Masters would die in a fire, I can now say thank you, I was wrong (the $10,000 bill is due in 6 days, and there may be a game trade reckoning). We made money, but only because we sipped at the D&D tsunami through a straw to gain a 18% gain in that department. 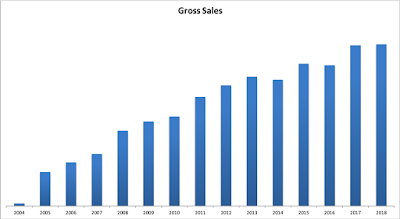 There was much flailing about in 2018 with this flatness, and much gnashing of teeth about increased expenses. Our payroll costs and rent rose 4%, both somewhat fixed with the rising minimum wage and our lease structure. This led to a tightening of the belt and cost cutting in other areas, marketing taking the biggest hit. Facebook Page promotion has stopped being a functional tool at this point, and we rely on Groups to do the heavy lifting. Marketing is another enigma, but mostly how to spend money effectively, since Groups are powerful and free.  It's more labor intensive but it costs zero dollars, other than directing customers to them.

In the end, cost of goods decreased significantly and cutting expenses rose profits. Dare I say, it was a better, more profitable year than 2017 by nearly 7%. When we're in boom times we crow about gross, but when it's slow and difficult, we can always talk about net. Cut your costs of goods by 1.5% on half a million dollars of stuff, and you've got a new car.

My book, Friendly Local Game Store released in May of 2018. It's on its fourth (small) print run and sells on Amazon and with game distributors, when they have it. It just received its first bad (2 star) customer review on Amazon! All reviews drive interest and this one has some valid criticisms about the narrative (and some off base ones). Publishing the book hasn't changed anything in my life, but it did help pay for an epic road trip visiting game stores and talking to owners throughout Mexico and Guatemala.

Thanks to everyone who supported us in 2018. We have many changes in store for 2019.

In Ensenada, Mexico
Posted by Gary Ray at Wednesday, January 02, 2019