The Holidays Were Nice

December was an interesting month for my store, if you think terrifying is interesting. It was a happy, hopeful, cheerful month. There was no sign of impeachment fatigue, as my wife suggested. There wasn't a feeling people were holding back because of a feared recession or tariffs. It was simply ... nice.

Nice is not what the last two years have been for us, especially the whirlwind holiday season of 2018. Really, I felt like we were hanging on for dear life with stratospheric, never before imagined sales. So, a whirlwind to ... nice. Light drizzle at best.

This is true for perhaps two thirds of retailers, from what I can gather. If you were kicking ass and taking names in November, growing rapidly, fueling your new initiatives, you probably had a great or at least flat December. You are winning. So what happened for the rest of us?

First, as I mentioned, it was nice. It was not a catastrophe, although I've used that word in describing it, mostly because I had mentally already spent the profits.  The season was very 2017 for us, last time I saw nice.

I should also mention we had a very efficient holiday season, as in nothing was discounted, there was no product in need of liquidation after Black Friday, and although our gross sales were down 15% from last year, our gross profit was only down 7%. We had some unfortunate outages, but I can count them on one hand (I really missed Dixit). We were a well oiled engine, albeit a V6 instead of a V8.

Second, reasons. There was no big Magic release, which was an oddity last year. WOTC doesn't normally do December releases, so it supercharged our engine. Events were also lackluster for Magic and other games. Events did not drive sales at all.

So everything else was the same? Mmmm, no. Everything was down for us except accessories like dice, miniatures, and paint. Again, it was nice, but we've been riding high on mass excitement surrounding hobby games and it has died down a bit. But it's still nice!

Third, if I can throw in a third, what should we expect from the first quarter of 2020? This was the question that had me stressed this week. Will I see a 15% decline in January? Will we return to nice? Maybe. Perhaps. I am planning for nice, but hoping for the whirlwind.

We ended our year 15 up an amazing 12%, despite a "nice" December. Please don't take planning for nice as capitulation, but I expect a flat 2020 with a focus on efficiency. It's recession thinking, but it's really just a return to nice. Again, there will be those with grand initiatives, and I think this is a good time to pursue them. 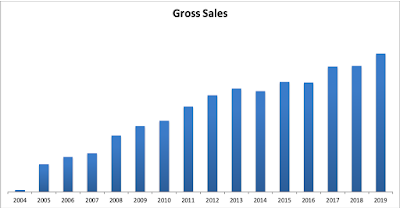