It's January and you're bored and the weather sucks. Say you want to get into a game but you don't want to spend a lot of money, especially up front while you're evaluating your interest. Assuming you have others willing to play with you, there are games out there that are exceptional values, maybe even loss leaders. These games are designed to get you into a hobby and just happen to be inexpensive and a great value. Here are my picks in each game category:

Role Playing Games
Savage World Explorer's Edition
It's a full color 6"x9" rulebook that contains the full rules for the Savage World RPG and only costs $9.99. That's right, a complete RPG for $10 and a good one too. Savage Worlds has a lot of gas in the tank, as they say, there are still lots of people playing this game and it's an easy one to pick up. There are no "core rulebooks" beyond this little guy, but there are setting books for Savage Worlds if you want more information. Some people complain when there's not enough material (they're not being supported), while others complain that they have too much to buy (they're ripping us off, man). With Savage Worlds you can run an adventure with this $9.99 book or you could branch into Deadlands, Solomon Kane, or about 25 other settings, available as books or PDF's.
Price History: There used to be a full size, hardcover rulebook for around $30. The little Explorer's Guide replaces it. 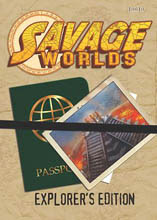 Warhammer 40K: Battle for Macragge
You get a playable force of Space Marines, Tyranids, terrain, a complete digest sized rulebook, a getting started guide that walks you through scenarios, dice and a template for $50. Warhammer 40,000 is still the most popular miniatures game and this starter set is a bargain. A hardcover rulebook alone is $50, for example. Say what you will about the company and their prices, but this box set is as close to a loss leader as I've seen in the game industry. You'll still want to buy some accessories, of course, and that can add up: primer, paint, glue, cutters; you could easily spend another $50 on that. However, if you already paint, that's an investment you've made in the past already. Battle for Skull Pass is the $50 Warhammer Fantasy Battles starter set. It's a good value, but has two less popular armies (dwarves and goblins) and lacks a guide for learning the game.

Price History: Battle for Macragge jumped from $45 to 50 last Summer. 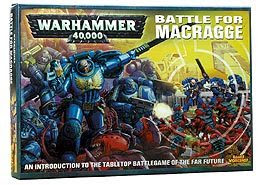