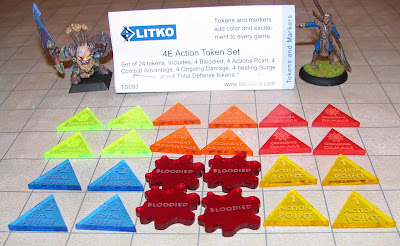 Occasionally I'll find some useful accessories that enhance my D&D game. The current one, that I'll be trying out tonight, is the 4E Action Token Set by Litko Aerosystems. Most of the token sets for 4E don't seem very useful, or include far too many tokens in a set. Let's take a look at this one.

Among the 24 tokens, the 4E Action Token Set contains four "Bloodied" counters, more than enough. Litko also sells a 10-pack of bloodied tokens, also sold at the store, but the quantity in this set should be fine. Four is good, five would have been ideal, as most monster encounters include a lot of minions that never get bloodied and between 1-5 larger monsters.

The second token in this set is the "1 Action Point Token," which should be useful for those who use pen and paper character sheets, but they're unnecessary if you're using power cards, either the upcoming version from WOTC, the various free ones online, or the printed cards from the DDI Character Builder. Again, the number four is somewhat arbitrary, with the iconic 4E game now consisting of five players.

The third is a "+2 Combat Advantage" token, which at first seemed irrelevant. You're flanking, why do you need a token to tell you about combat advantage? Then I remembered the various other things that could grant the advantage, such as blindness, being stunned or prone. Four of these tokens is plenty. I like.

The fourth is a bright red "Ongoing Damage" token, which is nice for helping to remember who has ongoing damage. In our 4E games, ongoing damage very rarely goes more than a couple rounds, so just a couple of these would be fine; we get four. Four is good, five might be the magic number for most of these.

The fifth token is "+2 Total Defense," a good token to place out there after a healing surge. I tend to forget the +2 bonus, since it doesn't last very long. Four of these tokens is fine, but the iconic five would be ideal so everyone could have their personal token, rather than pooling them.

The sixth token is "Healing Surge." This might have been a good idea, but with four tokens, it's more of a sample of a full pack of the tokens. Even low level characters get many surges a day, and a pack of 12 or 20 would have made more sense. Four tokens? No.

For $11.99, is it worth the money? That's $.50 a token, which seems reasonable, if you use them. The big disappointment for me is not enough of certain types of tokens, with only the action point token being somewhat useless, but only because we have other accessories that satisfy that need. I find the pack useful and would likely buy a pack of healing surge tokens, if they were available separately (they're not). The text on the tokens are a little light and I wouldn't mind a bit more contrast. In the store we're selling this set along with the bloodied tokens and a couple of skull token sets from Litko. I noticed on their website that the action tokens are no longer sold in this configuration, so maybe Litko has moved on.
Posted by Gary Ray at Sunday, February 22, 2009