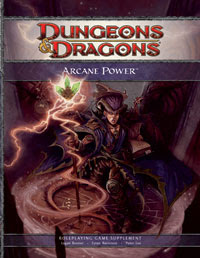 The surprise this week was the strength of the Arcane Power book for Dungeons & Dragons. Martial Power was an essential book, but it was a kind of dull, power oriented book that didn't add much flavor. Arcane Power has the crunch, but it also has new concepts for 4E, such as familiars, summoning, tomes and a slew of feats, including some that resolved arcane multi-classing issues.

Another thing I've noticed, now that we've got a bunch of new classes under our belt, is that every class, including expansion classes, are getting full coverage in subsequent books. If you played an expansion class in previous editions, you would have to wait a long time, or maybe forever, to see new material expanding your options. Arcane Power gives just as much coverage to the Swordmage and Sorcerer as the original PHB classes. In fact, I think the coolest thing in the book is the Storm Sorcerer build, where you regularly knock people on their butts with your stormy powers. Someone else told me their favorite build was the Cosmic Sorcerer, a kind of angry druid class of sorts, so there's a lot of appeal for different things in this book.

Our initial sales have been twice that of Martial Power, on par with the recent Player's Handbook 2. Distributors ran out quickly, as I think they planned for Martial Power level sales as well. I grabbed the last stack out of two West Coast warehouses yesterday, and was told warehouses across the country would be dry by the end of the day. If you want one of these, get it soon from wherever you get your books.

Side Note: The D&D dungeon tiles are also disappearing fast. Many are out of print from Wizards of the Coast, and distributors are quickly running out of their back stock. This is because of the excellent Dungeon Delve book that uses these. I learned yesterday that the higher level delves need two of each tile set, rather than the one I bought. Stock up accordingly (I just did).
Posted by Gary Ray at Thursday, April 23, 2009